As commentator Diane Coyle put it in the FT following the Spring Budget, productivity invariably looks higher when more services must be delivered with fewer people and less money, but “improving ‘productivity’ figures does not mean fiscal austerity has been delivering more for less. That would take a wholesale re-engineering of public services.” 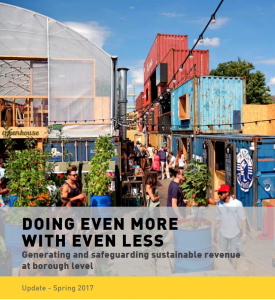 Local authorities are trying to do just that – incrementally in most cases, but with the understanding that they must not only do more with less, but do it differently if they are to serve residents and businesses well.

Future of London’s ‘Doing Even More with Even Less’ update provides a sampler of what some authorities are doing, and serves as a primer for those entering the sector. It is by no means exhaustive, and we encourage those in our network to get in touch with additional examples of innovation – we’ll be happy to share them.

Download the update here: Doing Even More with Even Less

Westminster City Council and Kensington and Chelsea have reluctantly decided to serve notice on the Tri-borough arrangements that were established in June 2011 to drive savings and public service reform for the benefit of residents in three key London boroughs.