Perspectives on the role and value of placemaking in London’s public realm can vary widely, if not wildly. Community groups, residents, businesses, landowners, councils, developers, cultural or educational organisations and other service providers may have different expectations of improving a place, with commercial, environmental and social objectives all in play.

Future of London’s 9th March workshop found there is common ground among stakeholders’ priorities, but it’s often obscured by technical language and mistrust.

The event kicked off with four practitioners describing a live project and how a diverse community had been engaged in the process.

Sue Cooper, Head of Business Development at Catalyst Housing, talked about its resident engagement strategy for Portobello Square, a major mixed-tenure estate regeneration scheme in RB Kensington & Chelsea. Residents were involved from an early stage through a residents’ charter, steering group and independent resident advisor. To broaden the range of voices, Catalyst targeted harder-to-reach communities through door-knocking and pop-ups, worked with Age UK to engage with older residents and used an Arabic translator to mitigate language barriers.

Marie Murray, Manager at Dalston Eastern Curve Garden, discussed how the garden, set up on disused railway land, was conceived as a meanwhile project, but has become a cherished green space used by a broad spectrum of the community. With the garden’s future uncertain due to development of the Dalston Quarter, Marie hoped the community would rally to keep the space by responding to LB Hackney’s Dalston Quarter consultation; she is also talking with the landowner.

Finally, Hasanul Hoque, Operations Director at Camden Town Unlimited BID, stressed that retaining the character of Camden means keeping an independent mix of businesses. This has been realised through cross-sector partnerships: convincing local businesses of the importance of a vibrant business community; encouraging local schools/colleges to take up work experience opportunities in the area; and demonstrating the success of BID initiatives to the council and GLA to pave the way for further funding. This funding has allowed Camden Collective, a series of affordable workspaces, to incubate several businesses in the area, many of which are expanding and creating jobs. 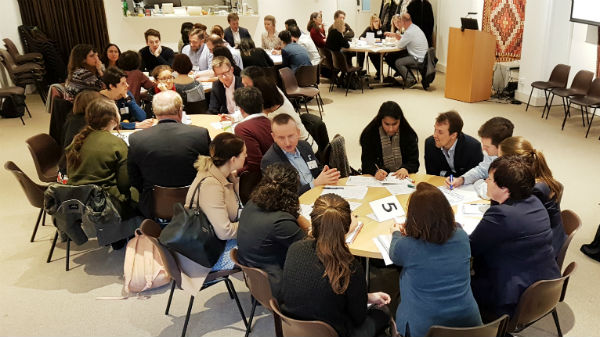 For the workshop, each table comprised a broad stakeholder group (e.g. housing associations or local economy) where participants discussed their group’s top placemaking priorities. After 10 minutes, participants moved to different tables at random. The mixed stakeholder groups reviewed the ‘host’ table’s placemaking priorities, searched for common ground, and discussed how to communicate the importance of priorities that weren’t shared or ran counter to those of other groups. Recurring themes included: