London generates around 30% of national business rates income, despite being home to only 16% of the country’s businesses.1London Councils, Self-sufficient local government: 100% Business Rates Retention

The tax – paid by businesses, based on the value of the property they occupy – has traditionally been collected by local government and distributed by central government, but since 2013, local authorities have retained 50% of the amount collected and can decide how it is spent.

Far-reaching rates reform proposed in 2016 appears to have moved to the back burner following the General Election, but this is still a critical time for businesses facing swingeing rates hikes this year, and for boroughs working out how to manage reforms as they unfold.

This Spotlight looks at some of the ways London authorities are already using business rates income to support regeneration and economic development – and at how they’re bracing for revaluation and other changes to come.

Prior to 2013, rates collected in London were redistributed nationally by central government. In 2013, new legislation allowed local authorities to retain 50% of rates. The government argued that this would give local authorities greater incentives to promote economic development, as they would have a direct share of any economic growth.

The Local Government Finance Bill proposed in 2016 announced plans for the full amount of business rates collected to be retained and used locally, however after the 2017 General Election it is unclear whether this will go ahead.

The GLA can levy additional business rates supplements where these will contribute to economic growth in the city, as with the 2012 Olympics and the first Crossrail programme. The Crossrail supplement amounts to 2p per pound of a property’s rateable value, and will contribute £4.1bn, around 25% of the GLA’s total contribution to the cost of the project.

In areas which have voted to adopt business improvement districts, businesses pay an additional levy to fund the BID’s activities. Our 2016 report, The Evolution of London’s BIDs showed the increasing impact these business-led bodies are having on regeneration across London.

Embedded in the laws governing business rates are discounts for particular types of businesses, organisations or buildings. These include charities and amateur sports clubs, and some small businesses, retailers, pubs and empty buildings, and amounted to some £650m in London in 2016/17.3London Councils, Self-sufficient local government: 100% Business Rates Retention

The 2011 Localism Act gave local authorities the power to add their own discretionary relief policies to the mandatory discounts, and some London authorities have been using these powers to target business behaviours.

Borough businesses occupying new or converted office space (B1 Use Class) are eligible for a discount of up to 30% for up to three years, and discounts are also available for temporary uses on sites awaiting development.

Charities are eligible for 80% mandatory relief, with up 100% relief if charities can demonstrate social value in relation to care, employment, health, social inclusion or community-building.

In its reasoning, the council argued that promotion of B1 space and meanwhile uses support Haringey’s economic regeneration strategy and encourage sectors offering high job density.

In April 2017, a long-delayed update to the business rates system came into effect. High growth in London property values since the last valuation in 2010 led to sharp rises for many London businesses: of the 20 local authorities with the largest rate rises, 16 are in London.4DCLG, Discretionary business rates relief scheme

A transitional arrangement will see a phased adoption in areas with the highest increases – which will save London businesses up to £1bn – and additional funding was made available to address businesses that would be hit hardest by the rises.

In Haringey, where business rates have risen 23% on average, the council consulted residents on how to best distribute the relief available. The council has been allocated £2m for transitional relief – effectively a discount on the rate increase – and wants to distribute it in ways that best support the council’s regeneration and economic development strategies.

In June 2017, the council adopted a policy that would allow it to prioritise small and medium-sized businesses and independents over national chains, arguing that the policy would target those most at risk from the rises. National chains are excluded from applying for the relief, a position that received support from the GLA during consultation.7Haringey council cabinet report, 20/6/2017

Around 19% of Londoners are paid less than the LLW, which is £9.75 per hour in 2017 – although in many boroughs, the percentage is much higher.

Brent, Ealing, Greenwich and Lewisham councils have all adopted schemes that offer business rates discounts to newly-registered LLW employers. The size of the discount is based on the cost of accreditation, which increases with the size of the business.

The schemes have seen an increase in LLW-registered employers – in Greenwich, 104 signed up – and have been extended to encourage more businesses to take advantage. 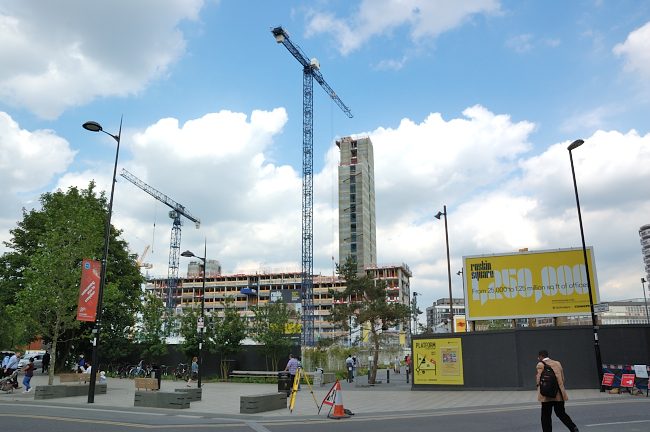 Under a 2016 agreement, the GLA will forgo its share of increases in business rates income for the duration of the zone’s operation (16 years). This funding will allow the council to finance infrastructure investment to promote growth, and is part of a wider £350m funding package to help deliver growth through town centre regeneration.

The model – a form of tax increment financing or TIF – uses future growth in Croydon’s tax base to pay off borrowing for upfront investment. The project will fund 39 interventions, such as improvements to the tram, bus and road networks, schemes at West Croydon station, public realm investment, walking and cycling improvements, and projects addressing energy and health.

The Royal Docks in LB Newham was established as an Enterprise Zone in 2012, one of 24 in the UK and the only one in London. The EZ designation means that businesses are incentivised to set up or relocate with a business rates discount of up to 100% over 5 years if they move before the 2018 deadline (up to £275,000 per business).

The London Economic Action Partnership (LEAP) will receive business rates collected in the EZ for 25 years and use this to fund improvements in the area, such as transport infrastructure, placemaking, broadband, skills and employment training, business incentives and cultural projects. The LEAP estimates that this could amount to £833m by 2037.

Future of London will continue to share developments in business rates reform, especially as they affect SMEs struggling to get or keep a foothold. Providing 41% of jobs as they do, these local employment engines need support.

Watch for upcoming briefings, and join us for our 5th October Workspace Match-up, where SME occupiers and providers, developers, property owners and local authorities share intel and find new partners.