As part of our three-year PRS programme, Future of London has followed licensing policy and practice across London, tracking the activities and progress of a number of boroughs. This post contains some observations; watch for a summary report, as well as our final PRS programme report, in December.

What is landlord licensing?

To legally let a property covered by a scheme, the landlord or agent requires a licence. Applicants need to demonstrate in their application that they are ‘fit and proper’, and that the property meets safety conditions.

With the PRS expected to be London’s dominant tenure by 2040, the use of private-rented properties as temporary accommodation and the high numbers of households with children in the sector, it is legitimate to argue that all PRS landlords should have some accountability to their local authority.

In England, this is not the system in place: although all local authorities implement mandatory licensing of large Houses in Multiple Occupation (HMOs), schemes covering different parts of the sector are discretionary. Local authorities generally use ‘additional licensing’ for smaller HMOs, and ‘selective licensing’ for all PRS properties in a designated area.

Although this has resulted in a fragmented regulatory landscape, the fact that councils are using their powers to tackle a major issue and protect their communities is positive. As the map below shows, 20 boroughs have one or more discretionary scheme – nine more than in 2015. Bexley, Havering and Hackney are consulting on introducing schemes for the first time; others to renew or extend existing schemes.

LB Newham, Croydon, Waltham Forest and Barking & Dagenham license all PRS properties in the borough – their schemes began before Communities and Local Government (CLG) prevented this approach through legislation. As an example, LB Newham is the first borough to seek to renew its borough-wide, whole-sector approach. At the time of publishing, it was still awaiting a decision. LB Brent and Redbridge are also waiting for approval of large schemes. 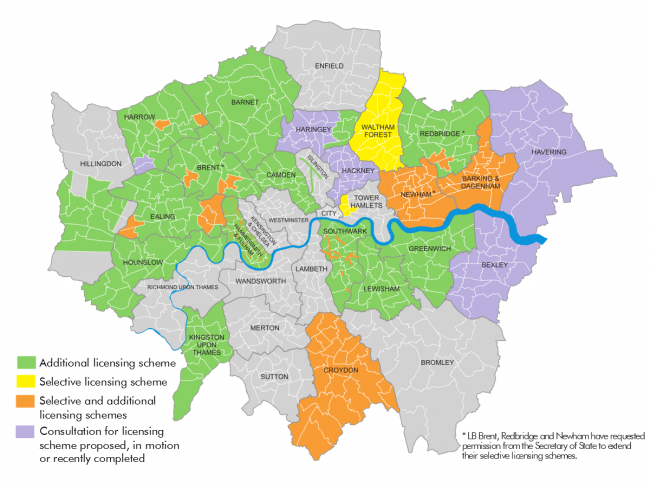 What can (and can’t) be achieved by licensing?

Licensing schemes increase information on landlords… but rarely comprehensively.
Councils often state that a key benefit of landlord licensing is improving knowledge and data about their PRS. But with most licensing schemes only covering HMOs, they only give a partial picture.

National registers, such as those compiled in Scotland and Northern Ireland, are mandatory for all private landlords. With significantly lower fees than most licensing schemes, they are the sort of light-touch approach that could appeal to government and landlords alike. If a register was well-managed, it could be a means of getting information and benefits to registered landlords. Accreditation schemes and membership bodies do this work, but for a limited number of landlords.

With a comprehensive national register to inform and connect with landlords, it is possible that fewer local authorities would require all-property licensing schemes, and could concentrate on running effective targeted schemes instead.

Licensing schemes facilitate enforcement action against criminal landlords.
Licensing is a simpler, less bureaucratic way of penalising exploitative landlords than the traditional Housing Act route. If the landlord or managing agent fail to obtain a licence for a property, or are the licensees of a property found to be breaching conditions, they are committing an offence.

Licensing also provides resources to carry out routine inspections and/or enforcement visits. Officer gain photographic evidence and tenant statements at these visits, which are used to build prosecution cases. Consequently, penalties are getting harder: Thames Magistrates Court fined landlords in Waltham Forest £85,000 for one hazardous HMO.

A licence does not always ensure standards for tenants.
A licence suggests a mark of approval, but many boroughs do not pre-inspect their properties before granting a licence. As an example, LB Newham, which licenses all properties but doesn’t pre-inspect, has issued thousands more licences than LB Barking & Dagenham, which pre-inspects every property first.

There are arguments on both sides. Inspecting all properties ensures the licence is meaningful, additional problems can be found and dealt with early, and landlords understand how the licence fee is used. On the other hand, granting licences without inspections generates revenue more quickly, which officers can aim at the biggest problems and arguably have greater effect overall.

Ultimately, local authorities’ choice of approach may fall to their knowledge and confidence to target resources without a rigorous inspection regime, and to the size of scheme (it is more manageable to pre-inspect a targeted scheme).

Poor IT and insufficient information frustrate landlords and officers.
Licensing schemes differ in terms of conditions and application systems. Landlords can struggle to locate scheme information online. Some application processes are digital; others are paper-based. While digital is far more efficient, dysfunctional online systems are frustrating for both landlords and officers. Standardising an IT system across London or nationally makes sense, but it is difficult when boroughs want bespoke systems for their schemes.

Tenants need to know more about licensing.
The core reason for enforcement activity is to protect tenants, but few boroughs are evaluating licensing from their perspective. Beyond ethics, it pays to include them: officers often rely on tenant intelligence to find unlicensed properties and build prosecution cases. Licensing schemes need to be accompanied by effective communication and relationship-building.