In the last 10 years, the private rented sector (PRS) has rarely been out of the public eye. Once a small proportion of the housing market catering for a specific need, the number of households in the PRS in England more than doubled in the past 20 years. London’s PRS doubled in just over a decade and continues to rise; 40% of London’s households could be private renters by 2030.

The ability of the PRS to adapt to shifts in the wider market is part of its potential. But with nearly a million people living in the PRS in poverty, 90,000 children in the PRS and spiralling costs of temporary accommodation, things need to change. Londoners deserve private-rented accommodation that is safe, affordable and secure. The status quo risks the health and well-being of many Londoners, and the economic success and productivity of the capital. 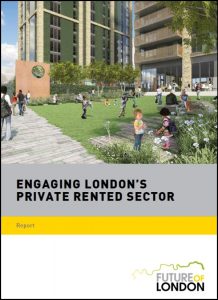 Tony Clements, Assistant Chief Executive, LB Newham, explained that a holistic approach was vital to improving the PRS. LB Newham is professionalising the borough’s PRS through enforcement action, prosecuting 1,225 fraudulent HMO landlords since 2013. Their approach is data-driven, using indicators of overcrowding such as high levels of waste to direct enforcement visits. Since 2015, larger licensing schemes have required Secretary of State approval. After a long delay, LB Newham received permission to renew their borough-wide scheme for a further five years. This may set a precedent for 100% licensing, we’ll be watching with interest as LB Brent and Redbridge go up for renewal.

Newham are also increasing supply through Red Door, their direct delivery vehicle. The company has delivered 165 homes, with another 680 in planning. Build to Rent is challenging and has a particular set of economics: for-sale development will always have the edge in terms of viability. Reforms to Best Consideration would help to recognise the long-term revenue benefits of the rental market. LB Newham urges other boroughs to take an incremental approach to development: build up expertise and skills while bringing forward smaller sites in line with the London Plan.

Danny Sutcliffe, Partner, Red Loft, noted that as the Build to Rent market matures, lines between public and private operators are blurring. Effective partnerships between these bodies can provide returns and benefits for all. Public and private sector actors operating in the market share two common traits: a desire for scale and a professional approach. These actors are slowly changing market dynamics at the top end, by providing a quality alternative to the existing sector.

Kath Scanlon, Research Fellow, LSE, asked how we can ensure improvements filter down to the lower end of the market. She also commented on the government’s approach to improving the PRS. Current methods are stringent, focusing on enforcement and tax reform. The underlying message is that landlords are the root cause of the sector’s challenges. Incentives and information could encourage improvement.

Seb Klier of Generation Rent also commented on the message put out by government. The narrative of home ownership as aspirational is consistently put out despite clear evidence that the PRS will house a growing number of people for life. The fragmented sector needs a vision and a collective voice. Improvement must also happen from the bottom up, with empowered tenants becoming advocates for affordable, decent and secure homes. Towards this end, Generation Rent is involved in setting up a renters’ union in 2018.

The underlying message of this report is the need for a strategy for the PRS that considers both the existing and the new, and the interlinked roles of developers, investors, landlords, tenants, boroughs, the GLA and CLG.  We urge all stakeholders to read the recommendations, collaborate, and share knowledge and data to foster the more equitable PRS that London needs and deserves.