Crossrail’s potential is just coming to the fore, according to a GVA report produced with input from Future of London. The Elizabeth line, a.k.a. Crossrail, will bring new rail service to stations in 12 London boroughs, linking Abbey Wood and Shenfield in the east to Heathrow in the west, then on to Reading. The line will add much-needed capacity to London’s transport network, reduce journey times and enable more change-free travel.

The massive infrastructure programme, Europe’s largest, has also boosted housing and regeneration across the capital, with around 90,000 homes to be built along the route by 2021 – significantly more than the 57,000 anticipated in previous studies.

Future of London contributed public-sector views and experiences of Crossrail’s impact, building on our 2014 report Crossrail as Catalyst. Members of the FoL network agreed Crossrail has made a positive contribution to housing and regeneration across the city, although that impact can be hard to distil from other influences.

Interviewees saw Crossrail as a catalyst, raising interest in areas previously seen as peripheral and helping accelerate or re-activate stalled schemes. The influence of Crossrail has clearly grown, with more activity linked to the line as completion nears. GVA’s analysis of planning applications around stations shows more and more applicants citing Crossrail as a driver or enabler.

Public- and private-sector interviewees all suggested this trend would continue after the Elizabeth line opens in December 2018. There was a consensus that seeing the line and stations in action will drive further investment, especially in outer London, where the market is occupier-led.

The key takeaway was that it’s not too late for host boroughs to make the most of this catalyst. Supporting lessons were about safeguarding quality, choosing the right development partners, and generally maximising the benefits for both existing and incoming residents, workers and traders.

In our host-borough interviews, three themes emerged as key to making Crossrail deliver well on the above: planning, placemaking and public-sector leadership.

Several interviewees noted that the arrival of the Elizabeth line by itself wouldn’t be enough to guarantee good growth in an area: “There needs to be a package of supporting infrastructure”.

LB Redbridge, which will have four Elizabeth line stations, developed planning policies focused on the route’s corridor, providing a framework for suitable development and related infrastructure requirements. This work formed the basis of an updated Local Plan.

In other areas, officers worried that some proposed buildings are out of character with their surrounds; robust planning policy can help articulate local context and set design aspirations for new development.

Similarly, where employment land may be lost, strong planning policies can help limit the loss or encourage/require replacement space in new developments.

New or updated planning documents can also help local authorities map out interventions that enable more housing. In Romford, the council and Crossrail are conducting a feasibility study on how a second entrance could increase housing delivery on land south of the station, which currently has poor access.

Crossrail and TfL have funded public realm improvements at stations, but many see broader complementary investment as a must-have for good placemaking – e.g. local bus service, integration between stations and pedestrian/cycle routes. These were cited most often in outer London, where existing connections are weaker.

“Crossrail is an enabler but not a sufficient condition for growth. It needs a lot of supporting effort from the public sector … there needs to be local transport feeding the station and good public realm that builds a sense of place.”

At Abbey Wood station on the border of Bexley and Greenwich, the two councils and major landowner Peabody are using GLA regeneration funding to make Harrow Manorway safer for pedestrians and cyclists and integrate surrounding development sites with the station.

In central London, LB Camden and TfL are pursuing a significant Tottenham Court Road investment programme, reintroducing two-way traffic, upgrading junctions, widening pavements and improving cycle paths. This investment has supported an upgrade of retail premises and greater economic diversification: for example, Facebook will use the area for its new London headquarters.

City of London Corporation has used the arrival of the Elizabeth line at Farringdon and Liverpool Street to pursue public realm improvements between the stations, including a ‘Culture Mile’ and pedestrian and cycle safety measures. On the other side of Farringdon, LB Islington is making similar improvements around Clerkenwell Green.

As with planning, interviewees said it was critical to develop placemaking work early, so funding can be allocated in good time. Projects have so far been funded through a mix of Section 106 and Community Infrastructure Levy, combined with TfL and GLA funding – and potentially the new Housing Infrastructure Fund. As in our previous Crossrail research, though, there were calls for new value capture mechanisms to help pay for such work.

Investment in placemaking has also come from the private sector: many of the Crossrail-linked developments in central London cited high-quality placemaking as key to encouraging investment in existing building stock. Great Portland Estates said investment in Hanover Square at Bond Street would not have happened without Crossrail.

Overall, there is clearly a growing appreciation of the role of placemaking in supporting regeneration and attracting investment. See FoL’s work on valuing placemaking here.

A third theme across all interviews was the importance of proactive leadership from the public sector.

Few Crossrail host boroughs have the luxury of just a few large landowners to work with; more typically, ownership is fragmented and councils have had to coordinate multiple stakeholders to move forward.

Where this was the case, interviewees stressed the importance of early engagement with private landowners, but also with transport bodies, utilities providers, public-sector landholders and other council departments.

While many regeneration projects linked to Crossrail have been on the cards for a long time, the fixed timescale associated with Crossrail provided impetus and revived some stalled projects. This can be used as a lever internally and externally.

Councils with property near stations have been able to increase their control over development – and the potential to earn more from their assets. Interviewees from these councils said Crossrail reduces risk, allowing them to be more ambitious and set the tone for private-sector investment: “Crossrail brings more growth possibilities and gives us license to be more ambitious.”

Several council officers found that being on the Crossrail route has brought increased visibility and put them ‘on the map’. Especially in outer London, authorities have found it easier to attract interest in sites that had been seen as peripheral. However, a clear vision and planning framework can help make the most of this appetite for local needs.

Future of London has been invited by Crossrail’s board to host an information-sharing forum for local authorities hosting Crossrail 1 and eventually Crossrail 2, to capture lessons and get the best outcomes for communities along both lines. To find out more or express interest, get in touch. 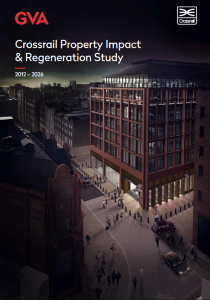