This article was produced for the Placemaking Collective UK. 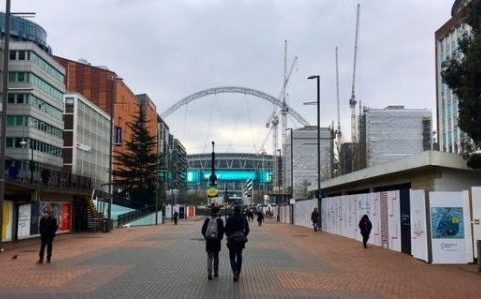 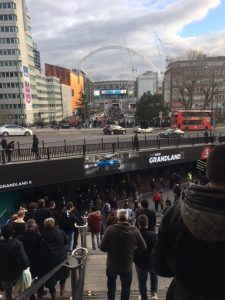 It was the best of boulevards, it was the worst of boulevards… (we can skip the rest, though most of the other contrasts in Dickens’s opening will resonate for anyone involved in city-making).

For someone who doesn’t follow football or Beyoncé, I’ve been spending an inordinate amount of time in Wembley, and am fascinated by its contrasting character(s). That contrast – and the serious challenge of managing it – is what makes it unique. 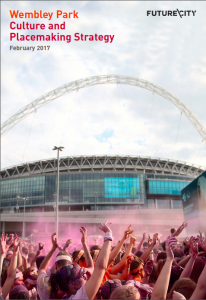 The Placemaking Collective visited on a frigid February day as guests of FutureCity’s Tim Jones. The visit focused on FutureCity’s Cultural Placemaking work for Wembley Park developer Quintain and followed Olympic Way from Wembley Park Station to the Brent Civic Centre. In one sense, this is a tiny slice of the area. In another, it is the locus of change in this key outer London borough.

Future of London ran a ‘Communities in Transition’ field trip to Wembley in 2015, part of a series on regeneration around anchor uses – stadia, markets, medical centres, shopping centres and civic assets (http://bit.ly/2E70sEO). Participants had some pointed questions: can the Olympic Way public realm be any friendlier? Why is the London Designer Outlet focused on selling trainers, and largely without designers – and is that OK? How does this high-traffic, new-development dumbbell shape connect with its surrounds and support the wider area, especially as it evolves and values rise? This 2018 visit started to answer those questions.

The landscape has changed irrevocably since 2015. Quintain’s 85-acre Wembley Park development, led by its ‘Tipi’ Build-to-Rent offer, is rocketing upwards relative to more constrained development sites. Olympic Way still has offices, hotels, big retail and student housing, with light industrial and acres of parking in the stadium precincts, but the cranes and towers now hide Brent Civic Centre, until recently the largest landmark after the stadium complex itself. The area is ideal to lead on build-to-rent housing, since a key requirement is ample ground-floor space to animate the area and draw residents and neighbours. Wembley has that in spades. 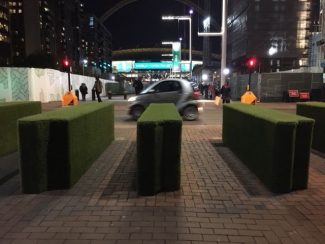 That being said, Olympic Way itself can’t change much. The pedestrian boulevard is designed specifically to move tens of thousands of people efficiently between station and stadium (and, more importantly, in the opposite direction, when much of the crowd may be fuelled with more than team spirit, and when keeping things peaceful is as important as keeping them moving). With requirements to safeguard against terrorist attacks, a new challenge is to make the hardware as ‘human’ as possible – AstroTurf and artwork on the concrete barriers are a start (see some other ideas from around the world here).

With Quintain now covering a greater share of the cost of public realm design and delivery than in 2015, there will be more trees along Olympic Way; there is a cultural placemaking strategy (which key borough officers and councillors were unaware of – still work to do on information-sharing amongst developer and council departments); and there is an understanding that the company must include ‘event people’ as well as development and operations teams, to respond to the ebb and flow of stadium and arena crowds.

Efforts are already underway to promote to the area’s sporting and exhibition history; to raise the retail and food game with a new Boxpark; and to pave the way for more interactive surrounds, including screens with information, sport and culture offerings. The latter need care: Walthamstow Town Square’s big screen had some negative reaction and cautionary tech glitches; smaller may be safer, or at least easier to cover if something goes wrong.

Assuming the Quintain Cultural Placemaking strategy comes good, what comes next is a broader and longer-term effort, tied to Brent Council winning Borough of Culture for 2020. For one, to make the most of the area’s [currently] rich mix of residents and traders, FutureCity uses one telling stat: it’s 80% likely that two strangers who meet and who both live in the borough will be from different cultures. If this changing area can sustain that mix, this will truly be a part of London worth emulating. 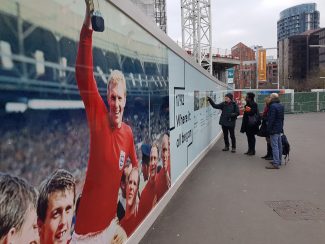 Another obvious target is making more of the area’s sporting heritage. Jones reminded the Placemaking Collective group that while the stadium hosts some of the world’s top athletes, the borough has the highest level of obesity-related hospital admissions in London.

Quintain and the borough want to connect that aspirational level of sport to the world outside, including activity types for different areas, cultures and facilities. It may be that the sport-focused London Designer Outlet is exactly what’s called for, and just needs a rebrand rather than shinier tenants.

Where the borough and Quintain efforts could excel or come up short, including as an example for any city, is integration with the surrounding area and wider borough. The Wembley Park/Olympic Way residential transformation is bounded by struggling high streets, low-density housing and low-intensity industrial uses and carparks; further afield are the very different areas of Harlesden, South Kilburn/Kensal/Queen’s Park, Park Royal and leafy suburbs. Quintain’s strategy does touch on Wembley-area integration, but more is needed.

That’s where borough efforts, including the Brent Business Board, have real value. This relatively new board is focused on marketing and sustaining Brent as a good place for employers of all sizes to locate and invest. The voluntary body includes councillors and borough officers, large employers Quintain and Diageo, universities and colleges, housing associations, varied small businesses, the Park Royal and West London Alliance business groups. 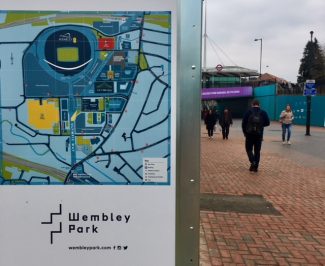 The borough has provided the business board with a workspace study, familiarisation field trips and other research. Among its key initiatives, the board will focus on work placements and apprenticeships, place marketing – and locally, a focus on Wembley Central beyond the Wembley Park development.

This area – and this council – has woken up, and is very ambitious. If it can provide an affordable offer and integrate the thousands of new arrivals to Wembley Park with their neighbours and millions of event visitors, it will succeed. London certainly needs the homes – and it needs the places around them to work too.

Thanks to Tim Jones for hosting & Poplar HARCA’s Paul Augarde for the ‘Boys of ’66’ photo.