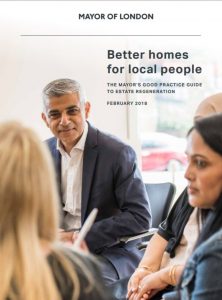 Responding to mounting political and public pressure, Mayor Sadiq Khan in February called on councils and housing associations to ballot estate residents on large GLA-funded schemes involving demolition. The move was designed to ‘make sure people living on housing estates were “at the heart of any decisions from the outset” (FT).

A consultation document accompanying the Better Homes for Local People guidance proposed a ballot as a condition of GLA funding for schemes of 150 new homes or more and which involve the demolition of existing social homes. Residents must be satisfied on: right to return; leaseholder offer; engagement offer; and aims and objectives of regeneration. The vote would be a simple yes/no outcome, with the process overseen by an independent expert. The GLA has been consulting on how this should be delivered; proposed guidance is available here.

To gauge response and understand how the public sector can respond to the initiative’s risks and opportunities, FoL’s London Housing Network focused on balloting in its standing-room-only April session.

Early on, delegates were asked, “Who here agrees with the principle of a ballot?” The majority of hands went up. Despite this consensus, there were concerns about how the ballot would work in practice. Here are the highlights:

Ballots will demand more from authorities than current engagement processes. Councils will still need to engage and consult with residents, but they will also have to advocate for a ‘yes’ vote in an often charged atmosphere. Further, complex schemes can take up to 20 years to complete and need stakeholders to take a long-term view. Whether residents will consider the ‘greater good’ is also debated, as outlined in this OnLondon article. Given that council cuts continue to bite, it was suggested that the GLA could establish a funding pot to support increased outreach activity.

The experience of many is that ‘the devil is in the detail’ when it comes to generating support for regeneration. Questions that matter to local people – such as what the floor plans look like and whether there is a garden – may not be answered before the ballot. The GLA proposed that at the time of the ballot, authorities should be able to offer design principles rather than detailed plans. Trust will be required for residents to vote ‘yes’.

Policy and market conditions also shift through the lifetime of most developments, potentially requiring changes; how will these be accounted for, communicated and responded to? There must be protections in place to ensure residents get what they voted for, as well as assurances for local authorities and housing associations that factors outside their control won’t cause later reprisals.

At its best, regeneration can deliver benefits, including more affordable housing,  community facilities and green space – but residents must be on board to achieve this. The task now is to develop a framework for the ballot that will support effective engagement; provide the right information for residents to make an informed decision; and build long-term trust between communities and local authorities.