LB Lewisham is leading the way on transformative schemes to overcoming major physical barriers, removing a major strategic roundabout and intending to realign the South Circular. On 1 August, we visited Lewisham, Ladywell and Catford to learn how improvements to road networks, landscaping, and walking routes are reducing severance and improving everyday pedestrian journeys within the borough’s economic and civic centres. This field trip was part of our Overcoming Barriers project.

As part of its ‘Lewisham 2000’ strategy in the ’90s, LB Lewisham constructed a roundabout between the Lewisham railway station and town centre, making the pedestrian journey between the two complicated and time-consuming. The roundabout was short-lived: in 2005 the council started making plans – called Lewisham Gateway – to remove it and repair town centre connections.

Michael Forrester, Major and Strategic Projects Manager at LB Lewisham, explained that the £30 m scheme, delivered by the council and TfL, has replaced the roundabout with a new road network – opening 5.6 hectares for mixed-use development, including nearly 1,000 homes, retail and a cinema. A wide, single-stage crossing connects the site to the town centre.

Accompanying this, the council hopes to improve the entrances of Lewisham shopping centre and integrate it more seamlessly with surrounding areas. Patchwork land ownership is a barrier: while Land Securities owns most of the shopping centre, they only partially own anchor units like Boots and Marks & Spencer, plus TfL has land on site.

Efforts are already underway to improve connections between the town centre and Cornmill Gardens, the town centre’s only major green space. As part of the regeneration, Cornmill Gardens was re-landscaped to provide flood attenuation, better lighting, and clear sightlines. The latter changes have reduced fear of crime, making it a well-used park that feels safe. Pedestrianised paths connect the gardens with Molesworth Street, which links to the shopping centre. The next barrier to tackle is the remainder of the route to Lewisham High Street, which currently requires walking through the shopping centre or taking a long detour. 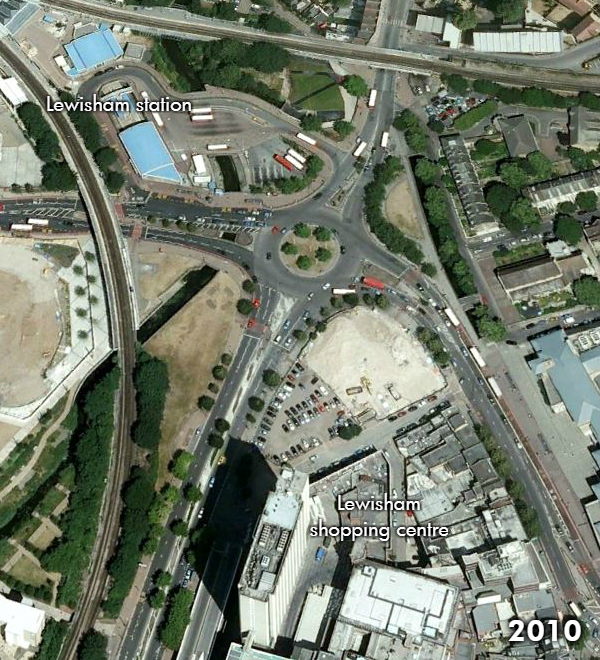 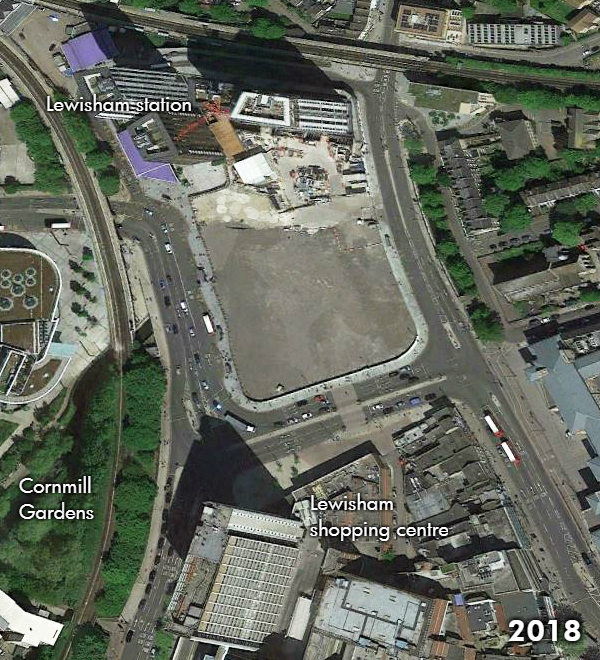 Satellite imagery from 2010 and 2018 shows the scale of Lewisham Gateway. The pedestrian journey from the station to the shopping centre previously required traversing multiple multi-stage crossings. Removing the roundabout will significantly improve the journey with one wide, single-stage crossing (visible towards the centre of the 2018 image). Images from Google Earth.

Although Lewisham High Street and its amenities extend into neighbouring Ladywell, many residents treat the railway viaduct at Morley Street as an informal border between Ladywell and Lewisham town centre. One project that attempts to draw people beyond the viaduct is Place Ladywell, clad in brightly-coloured panels with ground-floor workspace, retail and a café. Upper floors provide temporary housing, helping homeless families overcome barriers of securing accommodation.

Nearby, Ladywell Fields acts as a central gathering point for the borough, bordering several neighbourhoods including Ladywell, Honor Oak, and Catford. With EU funding, LB Lewisham re-landscaped the park in 2013. New pathways and entrances make it easier for people to access; improvements to lighting and sightlines reduce the fear of crime that prevented people from visiting; and the re-wilded Ravensbourne River and play areas give people a reason to use the park. A direct footpath linking Ladywell station to University Hospital Lewisham via the park has been particularly successful, frequented by hospital staff and visitors who previously would have taken the longer route around. 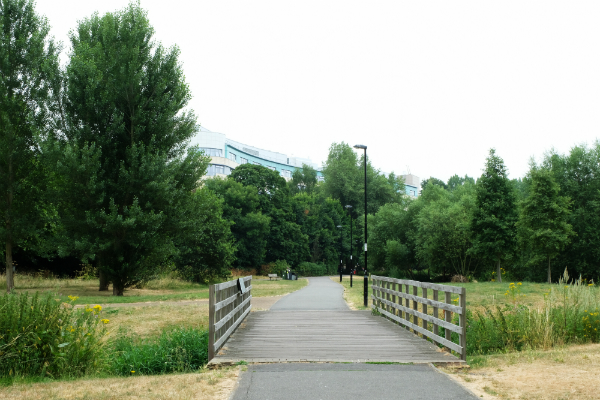 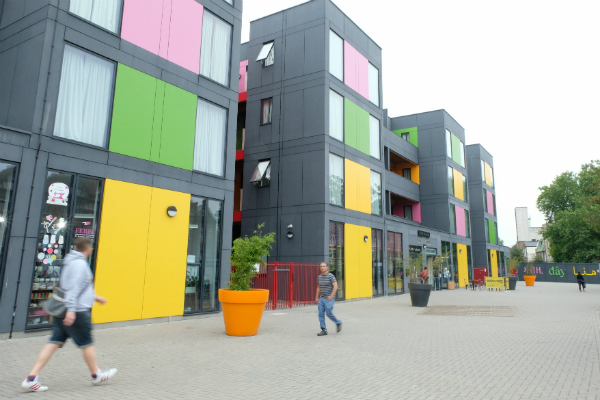 In Ladywell Fields, re-landscaping has transformed accessibility and perceptions of the park. The station to hospital footpath (L) is especially well-used. As a meanwhile use intended to activate a brownfield site ahead of redevelopment, Place Ladywell (R) has temporary planning permission until 2020, when it will be moved to another part of the borough – a relatively straightforward feat thanks to its modular construction.

Catford: living in and moving through Lewisham’s civic heart

Catford is both the civic and geographical centre of the borough, connected by two railway lines, the Ravensbourne and Pool Rivers, and major roads including the South Circular – which has hindered masterplanning in Catford for the last 50 years. Sarah Walsh, Senior Programme Manager at LB Lewisham, said that the council recently commissioned Gensler to do an integrated study of the town centre, taking a holistic view of all local infrastructure – not just the South Circular – and movement patterns. This study is informing an ambitious masterplan for Catford.

At Catford and Catford Bridge stations, the council wants to create a north-south walking route under the South Circular along the route of the Ravensbourne River, which will be uncovered. The route will connect to the Halford/Wickes site which is designated for development. Longer-term plans to build a single station ‘hub’ would accommodate the Bakerloo Line Extension and create wider footpaths at street level, incorporated into the roof of the station hub.

For many residents who responded to consultations on the town centre, which included a Commonplace portal with hundreds of comments, the South Circular causes the most harmful severance. With Lewisham Gateway as precedent, LB Lewisham plans to re-route the South Circular south of the council’s own Laurence House and remove the gyratory, creating opportunities to pedestrianise or develop on the leftover land. The bold plan has approval from LB Lewisham’s cabinet, TfL and the Mayor, bringing an end to the 50-year standstill over the South Circular.

Finally, Sarah mentioned another important consultation finding: that while workers, shoppers and other visitors fill Catford during the day, many people feel unsafe after the shops close and activity dies down. The council expects that building more housing – there’s space for up to 3,000 homes across five town centre sites – will help activate Catford and improve feelings of safety. 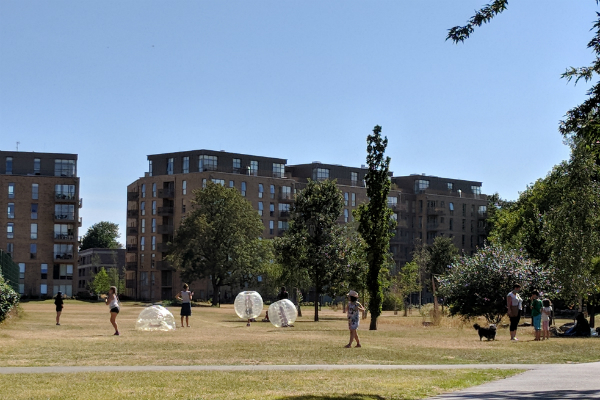 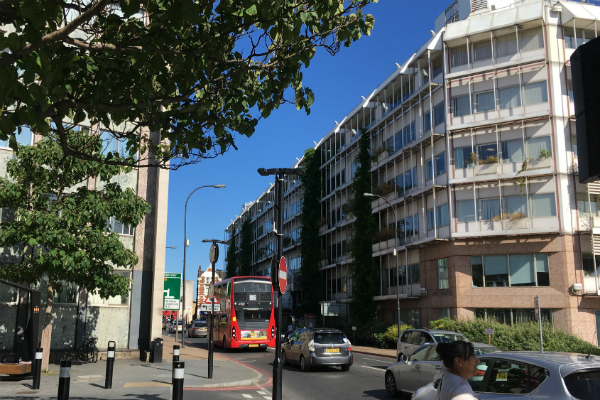 Nestled between Catford’s two railway lines and facing Ladywell Fields, the Catford Green development (L) is one of the first of several anticipated schemes to bring residents into Catford town centre. LB Lewisham wants to realign the South Circular to run south of Laurence House (R), reducing severance and freeing land for development.