As the capital runs out of easy places to build, remaining sites are often in neighbourhoods divided by roads, railways, waterways and other infrastructure or straddling neglected or contentious administrative borders.

In the rush to deliver much-needed housing and transport connections for Londoners, it’s critical that new infrastructure doesn’t compound existing barriers. On the contrary: regeneration and infrastructure schemes should be seen an opportunity to stitch communities back together.

Launched on 11 December at Arup, Future of London’s latest report, Overcoming London’s Barriers, shares practical approaches to addressing barriers and their impacts, collected through a year of research and discussion with cross-sector practitioners throughout London.

Amanda Robinson, Head of Knowledge at Future of London, shared research highlights and recommendations. With almost all of London’s largest regeneration areas cut up and cut off by barriers, developing these spaces will be challenging.

To build cohesive communities, it’s critical to understand the impacts of barriers, reconnect neighbourhoods, and spread benefits of development to existing residents. Smaller-scale projects like public realm and safety improvements also play a role and can have a large-scale cumulative impact. 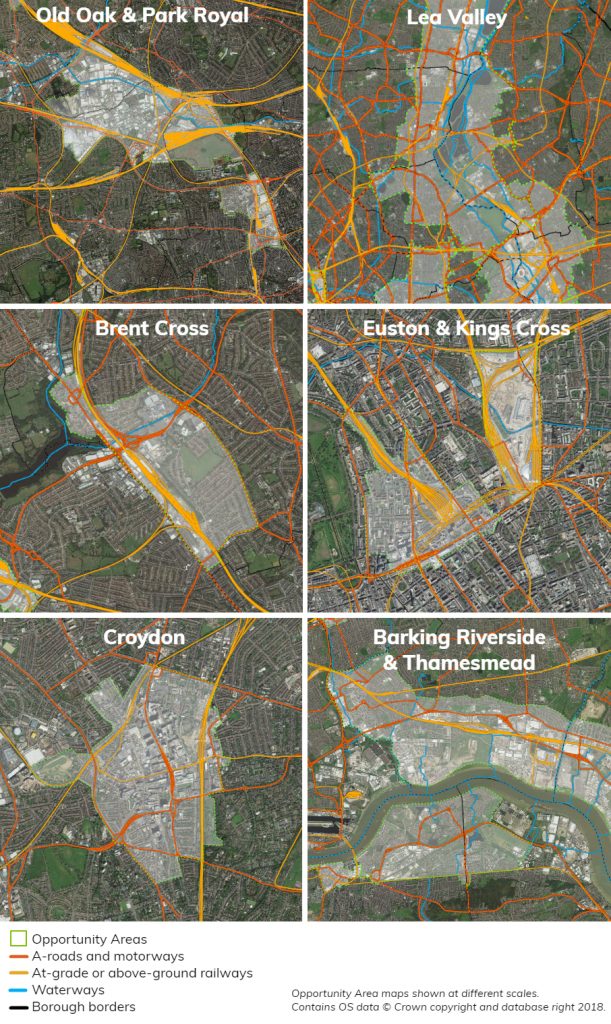 In The Image of the City, Kevin Lynch suggests that to avoid the worst excesses of severance, we should seek to see a “seam rather than a barrier, a line of exchange along which two areas are sewn together” (p100). In a similar vein, Matt Lally, Associate Director at Arup, advocates for imaginative, cross-disciplinary solutions for overcoming barriers.

Lally cited Jane Jacobs’ observation that barriers such as flyovers should not be spoken of “as matter-of-factly as if they were edges”. Without intervention, spaces around major infrastructure can suffer from neglect and blight. Constant work is needed to successfully reframe them.

Andreas Vassiliou, Associate Development Director at Countryside Properties, drew on his experience developing Beam Park (a case study in the report) to outline challenges of working on cross-borough schemes and beyond red-line boundaries. He noted that for the effective delivery of large-scale projects, it is almost inevitable that public-, private- and third-sector partners will have to work together.

The key to successful delivery of major projects is true collaboration between partners. Vassiliou called for cross-sector dialogue to begin as early as possible and relationships built with the long-term in mind.

LB Tower Hamlets are working with local schools on the design of the bridge and encouraging architects and consultants to talk to students, shining a light on potential career pathways.

Growing up in Glasgow in the 60s, Tricia Patel, Partner at Pollard Thomas Edwards (PTE), vividly remembers the scarring impact of the M8, a barrier she regularly had to cross.

Much of PTE’s work focuses on what the architectural critic Alan Powers called ‘visible mending’ – work to combat the divisions that play out through the built environment, be they physical, social or psychological in origin.

In agreement with Vassiliou, Patel attributes successes, such as PTE’s work at the Packington Estate, to a truly collaborative process and establishing a structure that allowed for honest discussion at the heart of all decisions.

Future of London’s report concludes with 33 practical recommendations for overcoming London’s barriers. We hope this report motivates all parties – especially local authorities, the GLA, TfL, developers, designers, and communities – to work collaboratively and avoid mistakes of the past, creating a more equitable and inclusive city.