In two of Camden’s busiest neighbourhoods, King’s Cross and Camden Town, the Regent’s Canal provides a scenic backdrop for popular markets and public spaces. Despite the bustle of these neighbourhoods, the canal link between the two is relatively tranquil. For LB Camden, this is by design.

On 27 March, FLL21 candidates visited Camden to learn how the council uses guidance and urban design to promote appropriate levels of activity around the canal with its delivery partners.

Edward Jarvis, Urban Design Manager at LB Camden, explained that while the council doesn’t have a designated canal strategy, much of the canal comes under its own Conservation Area (CA), stretching from King’s Cross to Camden Lock. Having a single CA for the canal simplifies engagement with developers and assessment of proposed canalside schemes. If the canal had instead been subsumed into neighbouring CAs, it would be subject to several different character appraisals, making the planning process more complex.

The wording of the CA’s character appraisal is also important. Instead of focusing on physical details – things like materials, building heights, and architectural styles – the character appraisal focuses on the experience of being near the canal to establish a sense of place. These values have been incorporated in recent projects at both ends of the canal.

“The Regent’s Canal […] has been increasingly recognised as a valuable resource for water-based leisure activities, for its tranquil seclusion, for its ecological value and its potential for transportation and informal recreation. It is the Council’s intention to conserve and enhance the existing character of the canal and to improve its potential for recreation, transportation and wildlife.

The special character of the area is largely derived from the almost hidden nature of the canal. The surrounding townscape largely turns its back on the canal creating a tranquil space distinct from the business of the surrounding city. This character has in part arisen from the topography of the canal located as it is in shallow cuttings along part of its length and partly as a result of canal side development forming an effective barrier, cutting off views towards the canal.”

At King’s Cross, careful design ensures appropriate amounts of traffic along the canal. Granary Square and Gasholder Park have large canalside areas, but the canal path connecting them narrows significantly as it bends around the Fish and Coal buildings (now renamed the Coal Office). A wider, alternative route takes people above the canal via Bagley Walk. With growing visitor numbers since last year’s opening of the Coal Drops Yard shopping area, the two-tier path system helps separate the calmer canalside from the busier movements associated with the retail and commercial space nearby.

The relationship between the two organisations is governed by two major documents: an Umbrella Agreement and a Maintenance Agreement. The documents specify things like access rights, operation and maintenance details, and a Canal Fund Contribution towards canal improvements. The Fund covered costs of a canal masterplan for King’s Cross, developed by CRT precursor British Waterways in 2010. The masterplan identified canal ‘gateways’ for improved access and views as well as appropriate material palettes to establish a cohesive and easy to maintain footpath.

The low railway bridge at the western edge of King’s Cross is both the physical and visual boundary of the site. While the King’s Cross side of the bridge is open and bustling, the Camley Street side is relatively narrow and calm. The canal path continues in this way until Camden Town.

The council encourages new development to follow suit. For example, at the Urbanest student housing and incubator space on Camley Street, the development team initially wanted to dismantle much of the canal wall to create two courtyards opening directly onto the towpath. Consultations with LB Camden, the GLA, and local residents revealed a preference to retain the wall and tranquillity of the towpath. The final scheme, completed in 2014, has the courtyards but uses small gates to carefully restrict access: the incubator space gate is closed to anyone without a fob and the public gate is closed outside daylight hours.

Safeguarding the serenity of the canal isn’t just about making sure the number of users is sustainable: it’s also about retaining space for nature through vegetation and natural lighting. But fewer canal users and limited lighting outside daytime hours breeds security issues. Striking the right balance is a challenge. 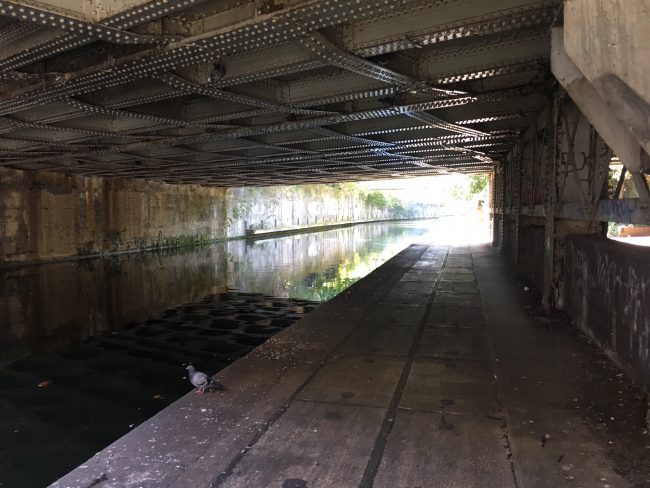 Camden Lock and the surrounding markets have long been among London’s most well-known waterside spaces and tourist destinations. Anticipating growing numbers of visitors in coming years, landowner LabTech—which acquired the Lock, market, and other nearby sites in 2014—is expanding Camden Town’s markets to Hawley Wharf. Will Rimell, Development Director at LabTech, explained that the new mixed-use scheme will open later this year. As the name suggests, part of Hawley Wharf fronts onto the canal.

As at King’s Cross, the development team has worked with LB Camden and the CRT to make sure the scheme is designed to manage towpath footfall. For example, although the scheme’s market and retail areas face the canal, they are located a storey above the towpath with a separate entrance and walkway. This both limits direct canal access and reduces litter from the markets being left along the towpath, a concern identified by the CRT, who receives annual Section 106 funding from LabTech towards canal cleaning. Additionally, ground floor public spaces are located towards the centre of the scheme, with limited and staggered views towards the canal.

As waterways grow in popularity as catalysts for regeneration and activation of public space, LB Camden’s conservation and design approach offers one option for managing different uses. Like Regent’s Canal, London’s waterways have a multitude of individual character areas, and understanding these is an important first step to unlocking a waterway’s full potential.