In its heyday, the Grand Junction Canal (now Grand Union) was a busy transport route between Birmingham and London. Upon opening in 1801, the canal’s Paddington Arm directed goods to and from the wharves and warehouses of Paddington basin, a key gateway to central London. Competition from railways around the mid-1800s triggered a slow decline of the canals as major transport infrastructure, catalysed further by mass uptake of motor vehicles a century later.

Paddington basin fell into disrepair, surrounded by vacant warehouses and car impound lots. This and poor accessibility deterred all but the most ardent anglers from using the area. In 1988, Westminster council designated Paddington as the Paddington Special Policy Area (later an opportunity area), one of the borough’s biggest regeneration schemes. As part of our major project, Making the Most of London’s Waterways, we visited Paddington to learn how developers have reignited activity around the basin.

Developers have created over 1,000 metres of new towpath over the last 20 years, and installed four new bridges, bringing to life brand new public space and access to the water for the first time in 200 years. Today, new office blocks house global headquarters, while workers, residents, and visitors enjoy amenities on and next to the canal.

Merchant Square, at the easternmost end of the basin, hosts a year-round activity and events programme, plus a permanent outdoor big screen, family-friendly water feature and food markets. Andrew Scrivener, CEO of European Land & Property, explained that the company wants to offer a range of activities to bring in new people. Their approach has been to ‘grow with the space’: by observing how people use and move around the space, they can implement new amenities or events and ask people for feedback rather than adhere to strictly-planned activities.

For example, European Land put pontoons around the site to allow access when construction temporarily blocked regular footpaths. They found that people liked to sit on the pontoons, which sparked the idea to build a floating garden – a unique space in London that attracts everything from yoga classes to business meetings to children’s birthday parties. Andrew sees the floating pocket park, water feature, and free water taxi and passenger Go Boats connecting to Paddington station as different ways for people to interact with the water.

At the neighbouring Brunel Building, the canalside location was a key selling point for owner-developer Derwent London in attracting office tenants. Emily Prideaux, Head of Leasing, welcomed us to the Paddington Pioneer: a narrowboat fitted out with building models and development information. This gave Derwent an on-site marketing base during development and prospective tenants a better understanding of the site than CGI drawings and maps. It also gave them a preview of their future relationship with the water. Now fully let to global companies like Sony Pictures, the Premier League, and Coach, the Brunel Building’s main entrance faces the canal with ground floor doors that can open onto the towpath.

Like European Land and Derwent, neighbouring developer British Land saw the canal as a major selling point for their own 4.5 hectare scheme and spent £10m on public realm improvements since purchasing the site from Development Securities in 2013. British Land also operates commercial moorings: greeting arrivals from Paddington’s canalside exit are two narrowboats which British Land bought and reconfigured as restaurants.

Tim Haddon, Head of Paddington Central Campus, noted that their location is deliberate, giving a sense of arrival from the station. The moorings allow British Land to extend their commercial offer and draw in a more local audience.

Public art also forms a major part of British Land’s development, which has on its fringes the low, dark underpass of Bishop’s Bridge Road and the imposing Westway flyover. Under the bridge, digital artwork commemorating Alan Turing adds light and interest. Under the flyover, rainbow panels on a support column and ping pong tables bring colour and social interaction to an otherwise hostile space. 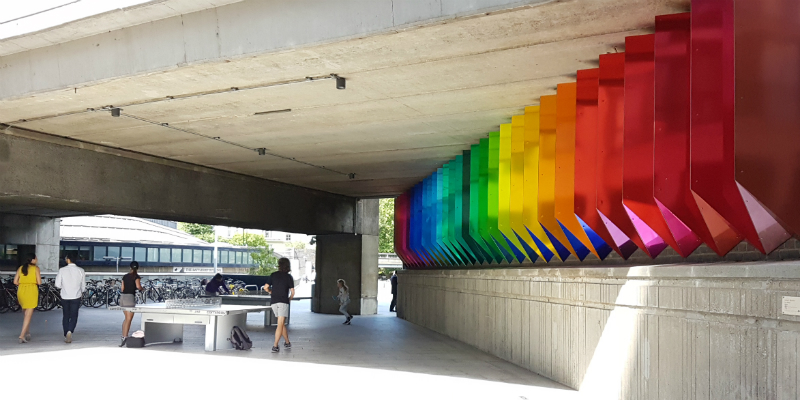 Paddington basin’s transformation isn’t immediately obvious from surrounding streets. It’s physically severed on nearly all sides, whether from the station and railway tracks to the southwest or the Westway along the north. Views into the site from nearby streets are limited.

Public transport connectivity is improving. British Land constructed a new entrance to Royal Oak tube station at Kingdom Street, while Crossrail brought a new canalside entrance to Paddington station. However, wayfinding to the Grand Union Canal within Network Rail’s parts of Paddington Station is non-existent. TfL’s Legible London maps are also found along the canal, though they confusingly don’t show the towpath.

Susannah Miller, Walking & Cycling Co-ordinator at the Canal & River Trust (CRT), manages pedestrians, cyclists, and boaters using towpaths. During her time at the CRT, she’s seen a change in perceptions of canals as they’re increasingly treated like an asset. For example, some towpaths are being incorporated into the ‘Quietway’ cycling network, and the CRT is improving material palettes and accessibility to attract more people.

With growing activity along the very limited physical space on the towpaths, messaging about appropriate behaviour is important. The CRT has towpath rangers to explain the ‘share the space, drop your pace’ campaign to cyclists and joggers and encourages other stakeholders, like the developers around Paddington, to promote the same consistent message.

For the Paddington Partnership, improving connectivity and wayfinding is paramount. They are working with PaddingtonNOW and Marble Arch business improvement districts to knit the entire area together. Earlier this year they also launched Paddington Connections, a competition which invited artists, architects, and designers to submit projects addressing severance and building a coherent identity for the area. The winning team is eligible for up to £250,000 to implement their idea in 2020.