Waterways are at the heart of extensive strategic planning in London, with thousands of homes and jobs anticipated for areas like the Lea Valley, Barking Riverside, the Royal Docks, and Thamesmead. Complementing these top-down changes, waterways have grown in popularity from a local level. Waterside paths fill with people each day; activities like kayaking and stand-up paddle boarding get people on the water; narrowboat living continues to surge; and local groups throughout the city are taking charge of river clean-ups and restorations.

With so many activities and opportunities in such limited space, built environment practitioners need to strike the right balance between wellbeing, leisure, living, transport, environment, and development around urban waterways.

Our 20 June conference brought together public, private, and third sector organisations with an interest in London’s waterways to share ideas to better manage and benefit from London’s canals, rivers, docks, and wetlands. The conference was part of FoL’s year-long project, Making the Most of London’s Waterways, and was kindly sponsored by Arup, Avison Young, Hadley, Pollard Thomas Edwards, and the Port of London Authority.

Recurring themes and key ideas from the day are summarised below. 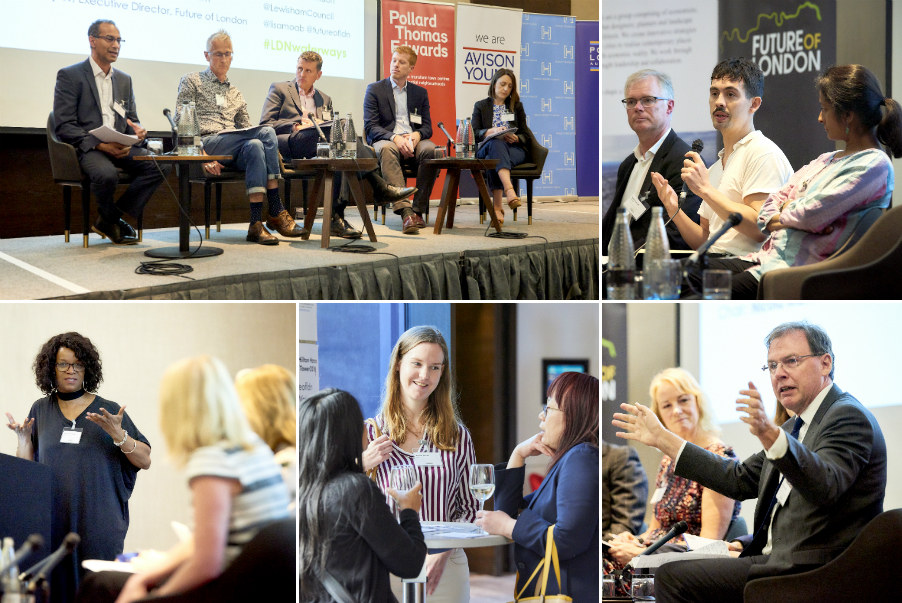 In his opening spotlight session, writer and researcher Tom Bolton pointed out that rivers form the boundaries of many boroughs. With multiple local authorities – plus other organisations like the Canal & River Trust, Port of London Authority, or the Environment Agency – each bearing some statutory responsibility for waterways, management requires a joined-up approach.

However, policies and priorities may clash from one organisation to the next. Among employees of organisations like local authorities, developers, or architects, there may not be expertise in the limitations and opportunities for developing around water. Some conference panellists and audience members also expressed frustration about not knowing who to contact across various organisations about issues relating to waterways.

A policy review can help map overlaps, gaps, and clashes; the Thames Estuary Partnership is doing this for strategies across various Thames-facing organisations. Dr Paul Brickell, Director at the LLDC, noted the value of passionate individuals who can work past policy barriers and promote good waterside schemes. Emma Talbot, Head of Planning at LB Lewisham, stressed that the planning process shouldn’t be about saying ‘no’ – it should be about working together to find the right solution.

As connected networks, London’s waterways are complex: what happens to one area affects another. This is particularly relevant from an environmental perspective.

For example, when it comes to contamination, pollution is easy to spread, hard to remove, and devastating for the environment. From plumbing misconnections to oil spills on the Lea to road runoff, pollution regularly makes its way into waterways.

Cleaning requires patience and a network-wide approach. Søren Hansen, Project Director at Ramboll, explained how the city of Copenhagen embarked on a strategy to make its formerly polluted harbour swimmable, which took around 15 years to complete. Sowmya Parthasarathy, Associate Director at Arup, offered a case study from Bangalore, India: cleaning its large Lake Ulsoor required intervention along feeder streams in the form of community outreach and behaviour change.

As our climate changes, managing surface water and river flooding is an increasingly pressing concern. For those involved in new development, understanding the flow of water during a flood and designing the built environment to retain and discharge water appropriately is a challenge. Dima Zogheib, Associate at Arup, and Abby Crisostomo, Senior Policy & Programme Officer at the GLA, urged practitioners to use Sustainable Urban Drainage Systems. Glasgow’s Smart Canal offers inspiration for another approach: using technology to monitor flood risk and unlock development.

For development along the Thames, the Port of London Authority is keen to promote freight – not only for moving construction materials and waste during building, but as a long-term option for moving goods. Wharves are necessary for this. However, few built environment practitioners have experience incorporating working wharves into residential or mixed-use development and residents may protest light industrial uses.

James Trimmer, Director of Planning & Environment at the PLA, suggested that people like seeing boats and river activity, which can be used as a starting point for integrating active wharves into development. Attitudes may also change as industrial/residential co-location gains traction. 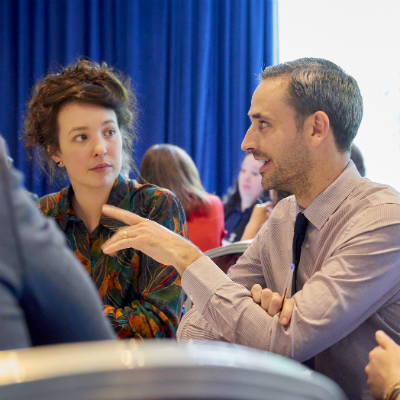 The ‘Working with Wharves’ workshop delivered by PLA, Lynch and GPS Marine, highlighted challenges to reactivating central London wharves, which are ideally placed to support construction logistics and achieve associated environmental benefits in line with the London Plan and Mayor’s Transport Strategy. Participants came up with creative solutions, including designs and roles for public and private stakeholders in enabling use of these access points for water freight on the Thames. (See the Freight Infrastructure in London Toolkit for practical guidance on water freight)

Andrew Beharrell, Senior Partner at Pollard Thomas Edwards, recalled how the deindustrialised docklands were a ‘dangerous wilderness poised between dereliction and reinvention’. Today areas like the Isle of Dogs, Wapping, and Shad Thames have established neighbourhoods. Along canals, growing numbers of cyclists, joggers, walkers, and boaters are helping change perceptions of waterways once considered to be crime-ridden, dirty backwaters.

Crime is still a problem, though, especially for people living on boats: a 2017 survey involving 400 boaters found that around 25% had been victim of an attempted or actual break-in. Boaters also lack easy access to services land-dwellers take for granted like waste disposal, water supply, GPs, and schools.

Sorwar Ahmed, Boating Manager at the Canal & River Trust, noted that the CRT recently published a mooring strategy. It identifies opportunities to add amenities for boaters, some of which can be linked to upcoming development. Speakers living on boats called for better engagement with boaters, with organisations like the National Bargee Travellers Association eager to help guide development and assist with policing. For example, Canal Watch London, a resident-led initiative patrolling east London’s towpaths and deter crime, is working with Community Support Officers and Rabbis along the Lea Valley.

Physical accessibility of London’s waterways also remains a challenge. Parts of the Thames path are blocked or involve diversions; waterside paths often have limited space for widening; and towpaths with cobblestones or steep access ramps deter some users. Ways to address this include setting policies for access to water in documents like Local Plans, catchment plans, and supplementary planning documents as well as early engagement with the CRT (or other organisations who manage waterside paths) on individual sites.

However, Andrew Beharrell and Jan Ackenhausen, Principal Urban Designer at OPDC, cautioned that widespread access many not be ideal; retaining tranquil areas is important to safeguard biodiversity and the character of waterways.

For all the increasing use of London’s waterways, many Londoners still aren’t aware of these assets – even when they live very nearby. Simon Myers, Director of Gasworks Dock Partnership in east London, reported that a survey of 1,000 people living near the Lea found around 80% were unaware of the river. Initiatives like outreach programmes, community-led river restorations, the National Park City project, and better strategies for physical accessibility as above could help.

With London at risk of water shortage, awareness of household-level water use also needs to improve. Londoners use around 150 litres of water per person per day, which is 20L above the national average and 40L above what’s sustainable. Robbie Parks, a PhD Candidate at Imperial, explained how a city-wide communications campaign helped Cape Town residents change their water consumption behaviour in light of severe water shortage in that city.

Securing funding for projects along waterways is difficult, competing with things like schools, community centres, and other public realm works for investment. Having a strong vision and a proactive approach can make it easier to take advantage of funding opportunities. Developer contributions can help, as at Woodberry Down, where Berkeley Group opened access to the reservoir for residents as part of its regeneration scheme. Even corporate sponsorship can play a role, as in LB Enfield where the Pymmes Brook restoration is part-funded through Coca Cola’s corporate social responsibility aims around contaminated water.

Other organisations are looking at local stewardship. For example, the Canal & River Trust offers stewardship of its waterways to local organisations. The OPDC is developing a Towpath Charter which will encourage local businesses to donate and empty two bins per week on the towpath and support corporate team days doing planting and cleaning along the canal.

National government also needs to step up. As one panellist put it: “If we’re in a climate emergency, we should be acting like it.”

Martyn Saunders, Director at Avison Young, remarked that development in the last 20 years has treated water as a purely decorative asset. The value of water is equated with the sale price of a scheme. Today, practitioners know water creates value beyond this, but guidance for measuring value is limited. The process of valuing water needs to go beyond sales to take in aspects like the economic value of wharves or the social value of waterside leisure spaces. 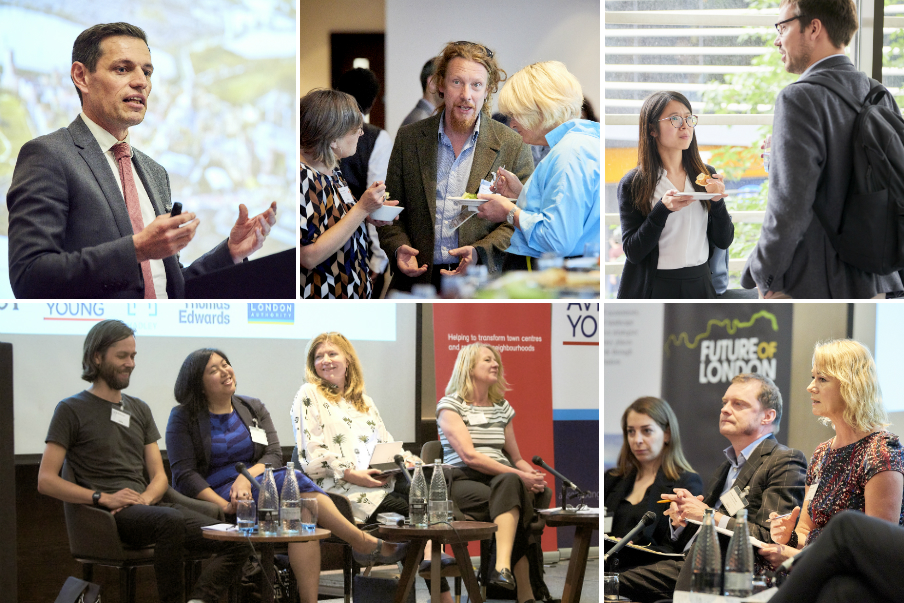 Thank you to the panellists, speakers, and chairs who contributed their expertise and experience:

Future of London’s final report for this project will launch on 11 December. Join the mailing list to receive an invitation to the event and stay up to date with our other projects.