Comprising around 12% of space in LB Newham and designated for 15,000 homes and 40,000 jobs in coming years, the Royal Docks is one of London’s largest opportunity areas. Incorporating both docks and the Thames, the area has many opportunities to make use of significant spaces on or near water. Future of London learned about some of these during a field trip to the Royal Docks as part of this year’s major project, Making the Most of London’s Waterways.

Brief history of the Royal Docks

Under the LDDC’s tenure, the docks received new or widened roads, the DLR, the ExCeL centre, London City Airport, a footbridge and a vehicle bridge over the docks, and a smattering of residential development. Industrial uses remained along the Thames. In 1990, the LDDC set up Royal Docks Management Authority (RoDMA) to oversee maintenance and long-term management of the water and related infrastructure. LDDC ceased operation in 1998, but RoDMA remains, and works alongside the Royal Docks Team. 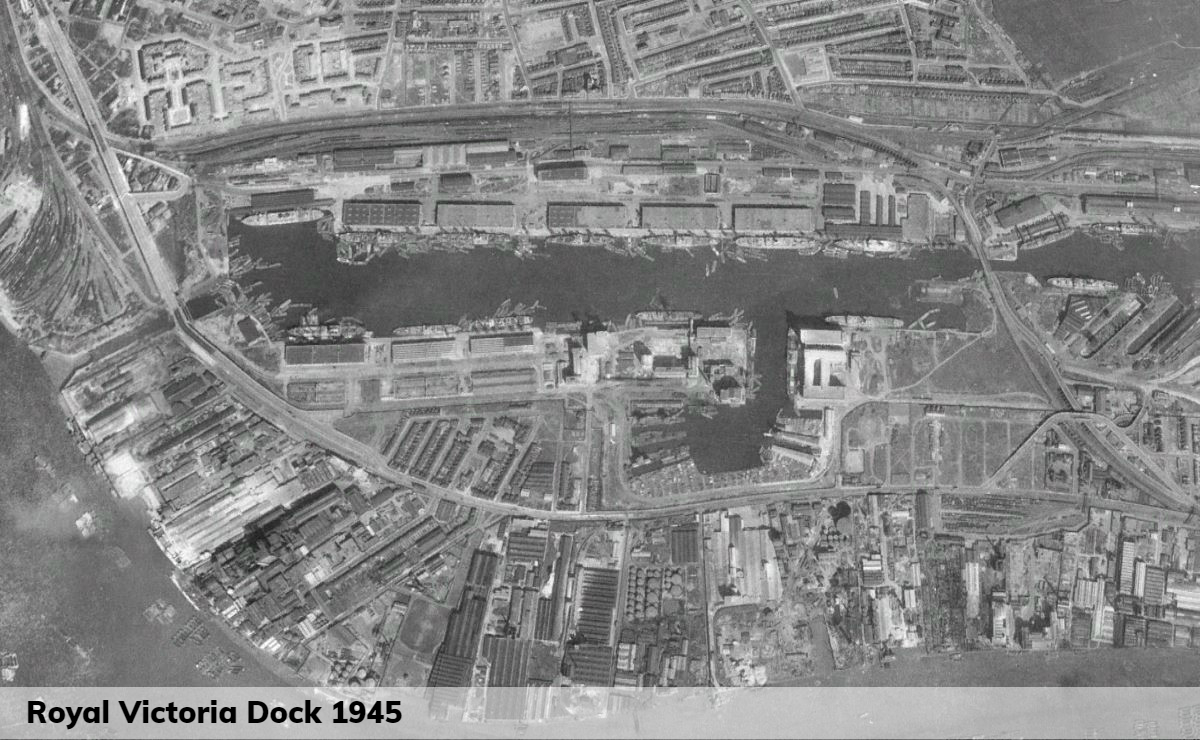 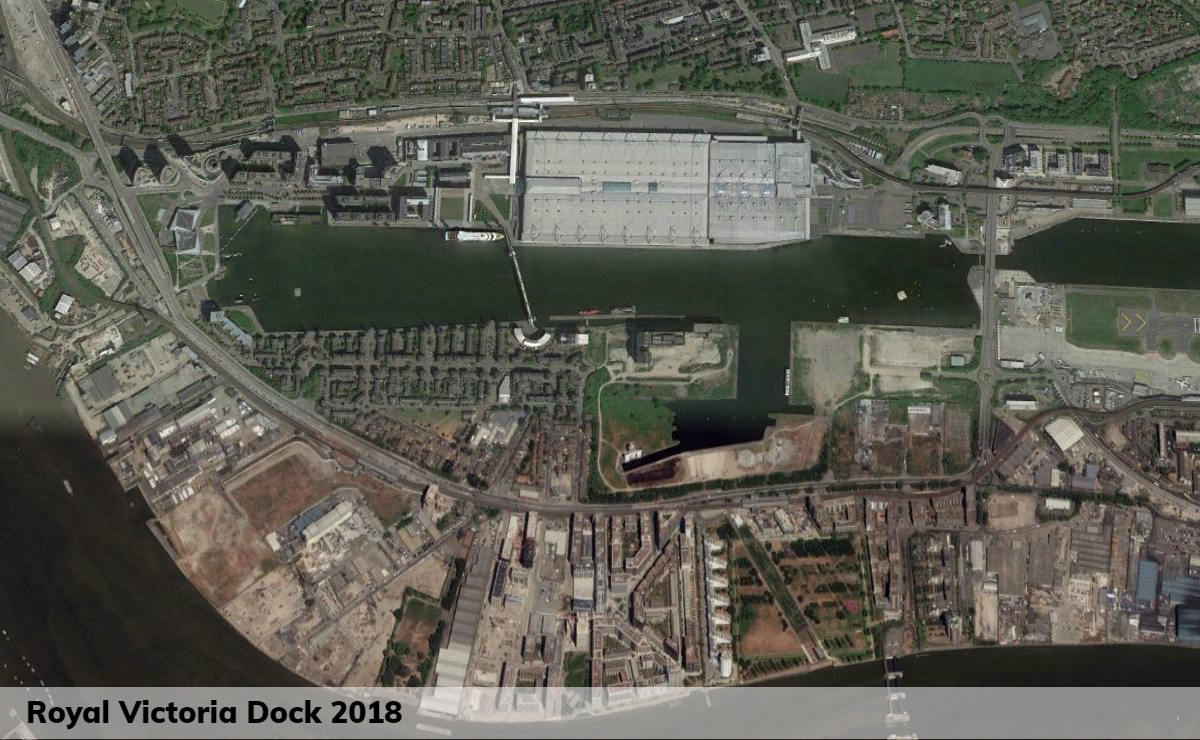 Today, although the docks are a fantastic asset of open blue space, their size – combined with the ribbons of roads and DLR infrastructure on either side – creates north-south severance. For the Royal Docks Team, a joint initiative between LB Newham and the GLA, addressing this severance and activating the docks to help people feel connected to the area is both a challenge and an ambition.

Paul Creed, Head of Development & Placemaking, explained that the Team is working through an initial five-year delivery plan. It’s backed by £500m for public realm works to address severance, create jobs, and activate the docks across three main development sites. Set up as an Enterprise Zone, further economic growth will be supported by reinvesting local business rates.

The westernmost dock, Royal Victoria is home to water-based activities. WakeUp Docklands gets people on the water with wakeboarding and stand-up paddleboarding. Nearby, a seasonal urban beach managed by the Royal Docks Team aims to attract local residents and families by offering a sandy shore, a padding pool, an enclosed and swimmable section of the docks, and open-water swimming lessons for kids.

Royal Victoria also hosts the ExCeL centre, which sees four million visitors per year – most of whom travel from Custom House to ExCeL without engaging with the docks. ExCeL’s enormous dockside façade is unused, and engagement with the docks from its waterside plaza are blocked by the Sunborn ship hotel. Paul Creed pointed out that Crossrail will bring the Royal Docks within reach of more people, with more events likely at ExCeL; making better use of waterside spaces could help change perceptions of the area. The Royal Docks Team hopes to work with ExCeL’s owners to enliven the south walkway and reposition the ship hotel to open up views across the docks.

By contrast, views from the towering Royal Victoria Dock bridge are unobstructed – but the lifts are regularly broken and the climb up stairs on either end is prohibitive for people with mobility impairments, pushchairs, or other heavy cargo. As the only north-south route for half a kilometer, keeping the bridge shipshape is critical for addressing severance. Lendlease, the development partner for Silvertown Quays (see below), plans to build a new step-free bridge.

On the south side of Royal Victoria Dock, the waterside Millennium Mills and adjoining sites have been subject to numerous proposals over the years. In autumn 2019, Lendlease will submit a planning application to develop the site (this follows outline planning permission granted in 2014 to the site’s previous developers). Will Stein, Commercial Development Manager at Lendlease, outlined the plans: a public space of similar size to that at Somerset House; 3000 homes (at least 900 affordable); and refurbished industrial buildings providing office and commercial space.

Silvertown Quays includes the Grade-II listed Silo D, a former flour silo located on a small finger dock. From here, Paul Creed pointed out that roads and buildings towards the Thames are at a lower level than the waterline of the docks. The slope at the south of the site presents a design challenge and causes some visual disconnection as the docks aren’t obvious from North Woolwich Road.

When Thames Barrier Park opened in 2000, it was largely surrounded by industrial and brownfield sites. Over the past few years, the park’s visitor numbers have grown as the Royal Wharf scheme’s 3,385 new homes bring residents to the area.

Transport links are critical to support this growth. North of the site, TfL is upgrading DLR carriages to walk-through models to boost capacity. To the south, the £5.5m Royal Wharf Pier will form a new connection to London’s network of Thames Clippers.

Sam Lyons, Project Architect at NEX—, the firm which designed the pier, outlined a key challenge: designing a pier to operate in one of the widest parts of London’s Thames. Their solution is 130 m long and divided into three parts. The first is a fixed promenade; the second is a central pier/viewing area inspired by the UK’s seaside piers, offering views towards the Thames Barrier; the third is a walkway and pontoon which move with the tide.

The design team approached the pier not just as a piece of transport infrastructure, but as a public space. For example, the promenade is 4.5 m wide to accommodate both visitors who want to linger and those rushing to catch boats, while the 16 m² central pier and pontoon offer views to the Barrier and Canary Wharf. A café on the pier will provide amenities and income for ongoing management and maintenance.

Many of the UK’s piers are built in the Netherlands, and this one is no different. It’s currently being constructed in four big pieces, which will be rolled onto a boat and shipped over. The pieces will be craned into place from the river in September, with the new pier operational from October.

This was the final field trip in this year’s Making the Most of London’s Waterways project. The final report for this project will launch on 11 December. Join the mailing list to receive an invitation to the event and stay up to date with our other projects.