Development equivalent to the size of Bristol is coming to London’s waterways: 222,000 homes and 254,000 jobs across 10,700 hectares are planned along canals, rivers, docks, and other water bodies. The scale of development has major implications for waterways, which comprise less than 3% of London’s public space but are already host to many activities and homes for both people and wildlife.

Throughout 2019, FoL’s Making the Most of London’s Waterways project reviewed the challenges and innovative approaches to development on or near water. More than 300 individuals representing more than 150 organisations engaged with the project, sharing insight and experience through field trips, interviews, a roundtable, a workshop, and a full-day conference.

The final report brings together case studies and recommendations gathered throughout the project. Arup kindly hosted the report launch on 11 December; a summary is below. 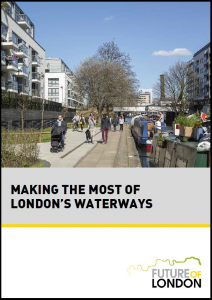 Making the Most of London's Waterways report

Amanda Robinson, Head of Knowledge, presented some of the recurring challenges practitioners discussed during the project. She pointed out case studies from London and beyond to illustrate interesting, replicable solutions – including small-scale but high-impact schemes such as Westminster’s meanwhile co-mooring community space; joint borough-community visions as at Meridian Water (see report); and city-wide projects like New York City’s comprehensive waterfront plan.

Four panellists offered short reflections on the project and report.

Having witnessed some 40 years of regeneration along waterways – much of it ‘generic’ – Andrew Beharrell, Senior Partner at Pollard Thomas Edwards echoed recommendations for greater understanding of local context and different characteristics along and between waterways. He urged the audience to be mindful development will alter the feel of a waterway. For example, canals are ‘narrow ribbons hemmed in by buildings’, a compressed space with ‘tricky’ access. “Consciously tight space is its character – we risk losing that with activation,” he commented.

Ros Daniels, London & Southeast Director at the Canal & River Trust, called for practitioners to champion waterways. The Trust is keen to involve other organisations and Londoners in stewardship of its network, such as through discussion forums, community canal adoptions, and stronger waterside design guidelines which would make managing the network more sustainable. Dedicated posts, such as Oxford’s Waterways Coordinator, are a good way to promote waterways and drive engagement.

Steve Kennard, Director of Regeneration at Hadley Property Group, noted a positive trend for London’s waterways: over the last 15 years, organisations like the GLA, boroughs, and Port of London Authority have become more aware of and amenable to opportunities associated with waterside development.

He also reflected on the concept of value. Hadley’s emerging Blackwall Yard scheme has a disused graving dock which could be a central aspect of the development. His team needs to understand both the cost of reconstructing it in the right way and the wider, longer-term social and economic value it could bring.

Thinking broadly about London as a whole, Dima Zogheib, Associate at Arup, suggested that how we design around waterways is an indicator of London’s progress towards Sustainable Development Goals and the effectiveness of partnerships. She recommended a common vision across London, overseen by a single governance structure, to coordinate organisations and policies.

Thank you to all event attendees and interviewees who took time to share their experiences and case studies. We are also grateful to core project sponsors Arup, Avison Young, Hadley Property Group, and Pollard Thomas Edwards; report and event sponsor Canal & River Trust; and conference and event sponsor Port of London Authority.