Central London is a dense urban area, with a large population of workers and commuters. This transient community tends to see the streetscape as a place to pass through on the way to work. High land values and cramped underground utilities make developing permanent interventions difficult but could temporary interventions create streets for people and build a sense of community?

This case study as part of FoL’s Community, connection and Covid-19 series and looks at how a temporary parklet in Fitzrovia has fared before and during the pandemic. And we also explore how we might better use our streetscape to make streets for people, not cars.

Constructed from a modular design of planters and benches and arranged in a former loading bay, Fitzpark is a 35m2 parklet located in Fitzrovia, Central London.

Parklets (sometimes also called pocket parks) are small, temporary seating areas or green spaces which are typically found alongside a pavement, or in a former parking space. Their modular design means they can be quickly installed with no need to move or adjust infrastructure or utilities. This makes them a relatively low-cost intervention; the design and construction of the Fitzpark parklet was £40,000, and maintenance is £10,000 a year.

As a public amenity, everyone is welcome to use the space. Visitors can go there to eat their lunch, meet friends and colleagues, or simply take a rest for five minutes.

“You need spaces to sit where you don’t have to pay for a beer or a sandwich – without these spaces you lose the opportunity to connect.”  Local Resident

Improved wellbeing for the commuting community

“Wellbeing is a positive psychological state in which people are able to flourish. The built and natural environment plays an important role in people’s wellbeing and is often overlooked” Kelly Watson – University of Manchester

Fitzpark was originally installed on Windmill Street in July 2017 for a period of six months. The main users of this space were the office workers commuting into central London during the week, and those who used the parklet noticed a 41% increase in self-reported wellbeing after the installation had been put in place. (Arup monitoring report, 2017).

“By providing the seating and planting, the parklet gave people the opportunity to spend time in a space which they enjoyed, and this had a positive knock-on effect on wellbeing” Emily Woodason, Associate, Arup

The parklet also changed the amount of time visitors spent on Windmill Street; instead of just passing through on the way to work or the tube there was an increase in the number of people who spent up to 30 minutes in Windmill Street. And the local business community – predominantly made up of small independent retailers, cafes and restaurants – also benefitted: 70% claimed it had had a positive impact on their business (Arup monitoring report, 2017).

Commuter interaction has increased, helping to foster a sense of community and encouraging them to engage with local residents and businesses.

Due to its success, Fitzpark was relocated from its original, temporary home on Windmill Street to a more permanent location, on nearby Fitzroy Street, in January 2020. But, two months later, the pandemic struck and central London was emptied of the commuters who typically swell Camden’s population by 200,000 people each day. 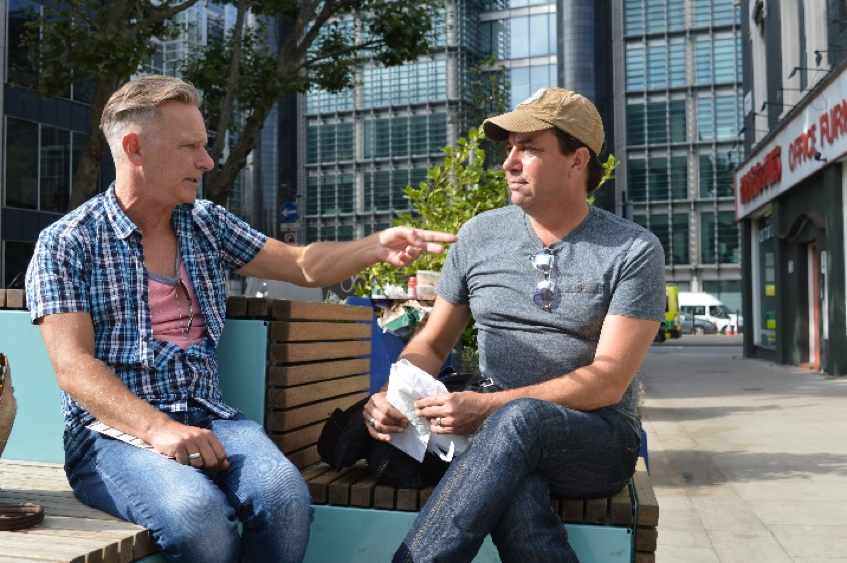 This dramatic change could have rendered Fitzpark redundant. But when I visited the parklet, just as London was emerging from the first lockdown, local residents told me that they felt it had made a positive contribution to community life.

“People’s priorities have shifted; isolation made us appreciate connection more and we’re no longer rushing from A to B. This kind of pocket park gives you the option to take five minutes to take your blinkers off.” Local resident

More than ever, streets are playing an important role in our social lives. It’s possible to quickly integrate social infrastructure into our cities, and communities can feel the positive impact almost immediately. In fact, lockdown has shown that there’s an appetite for alfresco social spaces, and the Fitzrovia Partnership (BID) they are now exploring how they scale the parklet scheme across Fitzrovia.

“Why did it take Covid for London to wake up to the whole alfresco movement? You can easily spend nine months of the year outside in London, but up until now there hasn’t been any outside seating!”  Local resident

The approach in Fitzrovia was designed for central London’s commuting community, but there are key lessons for London’s more residential communities too. Hackney is London’s leading borough for parklets and they have some fantastic examples which illustrate how parklets can be adapted to suit their local communities.

By making places for people, communities also benefit from a reduction in car use. Emily Woodason said: “Parklets also show that as soon as you create places where people feel safe and happy to walk, then you are going to reduce demands on public transport and their reliance on the car.” As we emerge from the pandemic, we’re beginning to see low-traffic neighbourhoods (LTNs) pop up across London and the principles of pocket parks can be applied to these neighbourhoods too.

Flexible, responsive design
The small scale and temporary nature of parklets offer a way to retrofit infrastructure into the streetscape, creating additional seating spaces. This is especially useful when seating indoors is limited due to social distancing guidelines, or when local residents are in need of a break from their homes. And the modular design means it’s relatively easy to reconfigure as and when social distancing guidelines and social norms change.

To make the installation of parklets easier, London can learn a lot from San Francisco, the birthplace of pocket parks. In particular, San Francisco has an expedited planning process which empowers communities to create and care for their own temporary interventions.

Incremental programming to space out funding
Post-pandemic funding will be a critical issue. Because parklets are by definition small, and often temporary, it’s possible to deliver them in stages. This spaces out capital expenditure for converting these installations into permanent pocket parks.

Catch-up on our Places, Spaces and Sociality webinar, which debated how architecture, planning and urban design can inspire social connection within our cities here, and the entire People Place and Community project here.