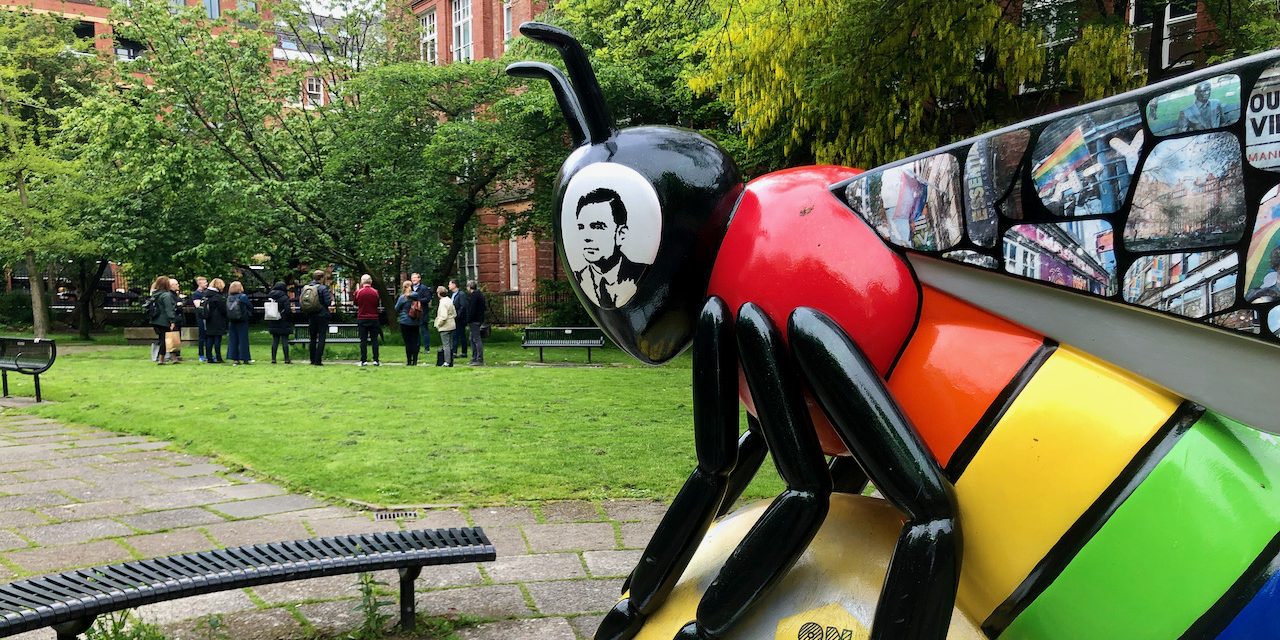 Now in its second year, Greater Manchester Leaders Plus has yet to have a “normal” run, with the 2020 first cohort having gone into lockdown early on, and the 2021 cohort having started its nine-month course online. Given how valuable connection and conversation are for these senior-level programmes, we’ve been blown away by the level of engagement candidates – and mentors – have shared online.

Offering a field trip to both cohorts this spring was an obvious choice, and they grabbed the opportunity, with busy people from both years hosting stops, offering help and connections and fully involved on the day.

Over two-plus hours, followed by chat & drinks at Freight Island, we toured the Gay Village, Chinatown, the Northern Quarter, Ancoats, New Islington and Mayfield Depot, including a moment between the last two where digital wayfinding failed us and we had to navigate retro-style by landmarks and brewery knowledge. 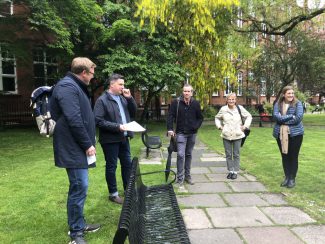 The Gay Village – We started at Sackville Gardens – home to the Alan Turing Memorial and three other LGBTQ memorials – with reflections from Marc Watterson, Associate Town Planner at Arup and part of the company’s Equality, Diversity & Inclusion leadership.

“The Gay Village was one of the biggest reasons I moved to Manchester over 20 years ago. It was a space where, as a member of the LGBT community, you could be yourself without fear or prejudice and there was plenty still about… it felt like there was an invisible red line around it, beyond which you were less likely to be yourself.”

“Notwithstanding how the world has moved on, there is massive concern that the boundaries of the Village are being incrementally shrunk by ongoing development pressure (KAMPUS and Portland Street are prime examples), and that this pressure is challenging the soul, purpose and character of the Village.” 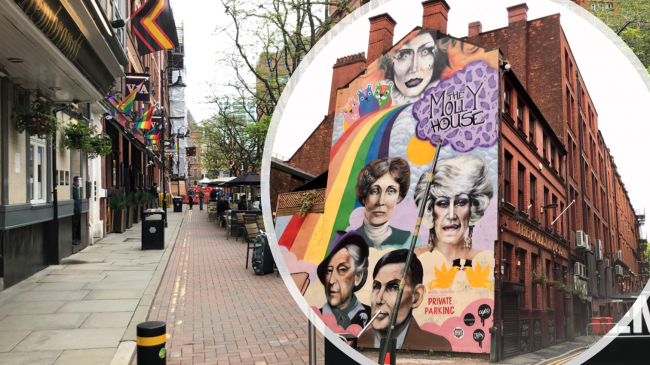 To understand those pressures, the area’s changing role for the LGBTQ community and more, Dave Watson and colleagues at Hatch were commissioned by Manchester City Council to do a ‘listening and learning’ exercise in 2020, producing an evidence-based report on the Village’s ‘Past, Present and Future’.

The team used varied approaches including historical evidence, socio-economic datasets, mapping and stakeholder engagement to identify challenges and opportunities. The engagement in particular – consultations, focus groups, drop-in sessions and a survey – provided a wide range of perspectives which Hatch synthesised with other evidence to provide key messages for MCC.

We then stopped at the leafy Manchester Chinatown Car Park to see the potential for Marc’s “Call to Green” Proposal for GM, to create more accessible, equitable green space in the city centre – you can see that here. 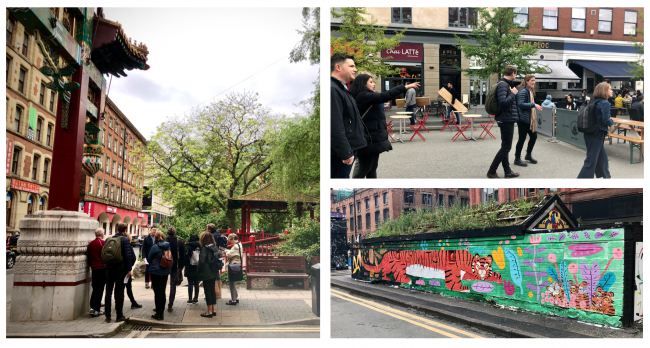 The Northern Quarter wasn’t a planned stop, but as always, this lively neighbourhood captures you, and those who hadn’t been in town for a while marvelled at how enjoyable the newly pedestrianised Stevenson Square was. Unfortunately, the space took a battering following England’s win over Denmark in the Euros. Anyone wanting to take on the question of how crowds (remember them?) use and abuse public space, get in touch! 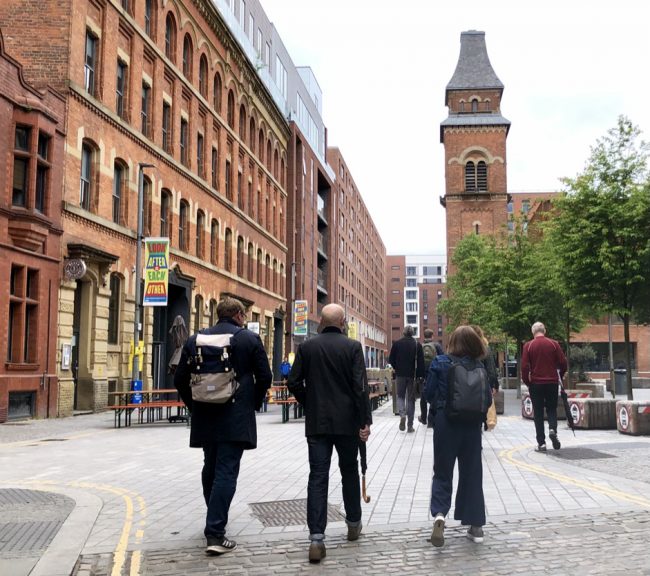 At Ancoats, we got a full tour including a visit to the Hallé Orchestra’s lovely space. Homes England’s Mark Canning, a current GMLP candidate, was a Northwest Regional Development Agency project manager for the  Ancoats programme during its most active years.

He shared a briefing beforehand, and on the day, highlighted the critical mix and leverage of public-private investment; the complexity of the land assembly; the cultural merit and commercial astuteness of restoring the area’s 14 listed buildings [as at King’s Cross]; and the evolution of the area’s flexible public spaces, residential mix and independent retail and hospitality offer. 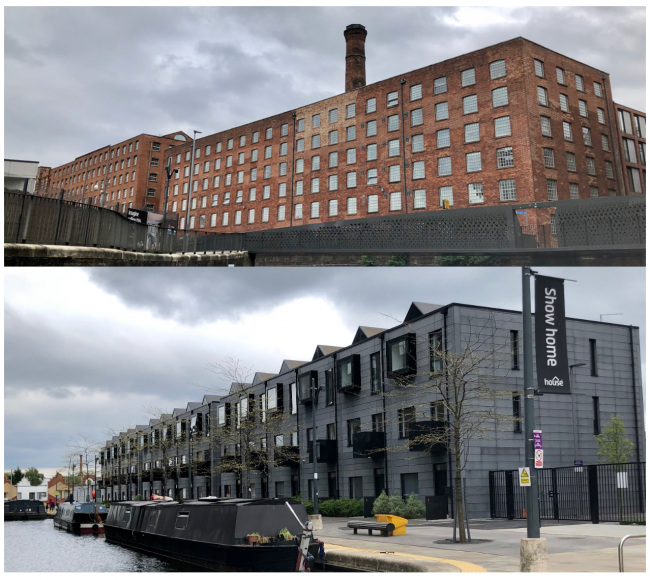 The overall scheme stretches to streamlined New Islington, with its marina and canal-side new homes, many of which are part of Urban Splash & shedkm’s ‘pick-and-mix’ modular offer.

Finally, after navigating the back-of-beyond northeast of Piccadilly Station, we closed at ambitious Mayfield Manchester, for  a behind-the-scenes tour and background from project partners including Manchester City Council’s Hilary Sayers and U+I’s Mike Harrison (LCR is the other partner).

Mayfield’s 6.5-acre park – the first in the city centre – will open up the Medlock River and form the core of a new mixed-level, mixed-use neighbourhood. The meanwhile offer of events and pop-up food & drink is already enlivening the area, and will be unstoppable once lockdown ends.

Until then, a huge thanks to all our hosts and everyone able to attend – what an amazing first outing! – and here’s to the next one: a July visit for Cohort 2 to Stockport, home of the first Town Centre Mayoral Development Corporation (and other things, of course!). For more on the humble field trip, see here…