The government’s long-awaited Levelling Up White Paper was finally published on 2 February 2022. It’s a commitment to tackle geographical inequities and spread opportunity more equally across the UK. But what does this mean for London? In a Chatham House briefing with Future of London’s steering group on 9 February, Professor Tony Travers, LSE, and Bek Seeley, Lendlease, shared their thoughts and analysis.

Is London the gold standard?

There are 12 missions outlined in the white paper, which focus on issues like housing, health, education and skills. “For many of these missions, there’s a case to be made for addressing these issues and levelling up within London,” argued Tony Travers. However, London is used a yardstick throughout the white paper. Whether or not the government genuinely thinks that London requires less attention, the white paper presents the situation in these terms: it’s the rest of the country, not London, which needs levelling up.

“By 2030, local public transport connectivity across the country will be significantly closer to the standards of London.”

From the Levelling Up White Paper’s mission for transport, p. xvii

Presenting London in this way overlooks the geographic and socioeconomic disparities within the capital. One example of this is healthy life expectancy (HLE; the average number of years people live before their health deteriorates). According to Trust for London’s London’s Poverty Profile, the HLE of women living in the worst performing London borough (LB Tower Hamlets, 57.2 years) is more than 13 years lower than in the best performing borough (LB Southwark, 70.8 years).

Another example is housing. High house prices and an acute shortage of affordable housing in London mean that home ownership is out of the reach of many. But the white paper states that the government plans to “scrap the 80/20 funding rule that focused investment in Greater London, and instead invest in more homes in the North and Midlands” (p. xxvi).

The ‘80/20 rule’ prioritises Homes England spending in places with low housing affordability and 80% of government funding for housing supply is currently directed in this way. Scrapping this policy might mean less affordable housing is built in the capital, which will disadvantage lower-income Londoners.

Will London get left behind?

For Tony, one of the big risks presented by the white paper is that the perception of London as affluent will result in resources being redistributed to other parts of the country, and new money and infrastructure projects bypassing the capital. Londoners on low incomes will remain ‘left behind’. And some of the key challenges facing the capital – such as low levels of wellbeing, high levels of youth unemployment and the housing shortage – won’t get addressed. Levelling up for the rest of the country might mean levelling down for London.

However, members of the steering group were also keen to point out that London still has an advantage in terms of being the most prominent place to invest in. Although we need to discuss London’s position within the UK with sensitivity, those of us working in the built environment need to get better at explaining how investment and development in London – and indeed how levelling up within the capital – would benefit other parts of the country.

The white paper’s explicit commitment to devolution is an opportunity for the capital to acquire more agency and to lobby more effectively for what London needs, especially more control over its finances.

How do we align the regional resources at our disposable to get in the best position to act on the levelling up agenda – and benefit from it?

Will development slow down?

As a developer working in London and the rest of the UK, Bek Seeley offered a very practical perspective on what the levelling up agenda might mean on the ground.

She explained that the white paper brings together a number of things that are already in traction. If those working in the sector have to sit down and measure what they’re already doing against the levelling up agenda, further time will be lost.

As the UK begins to open up post-pandemic there’s an  opportunity to build much needed momentum on matters such as community engagement, planning and securing investment. Bek set out the need to make sure that this positive traction wasn’t disrupted.

How will devolution work in practice?

Whilst very much welcoming the further involvement of local communities, Bek also highlighted that there’s a risk that the devolution agenda – if it’s not done efficiently – will slow down development and placemaking. The white paper’s focus on pride in place is welcome; you can’t build a successful place without working with the local community and local pride results in better long-term outcomes.

However, devolution might mean there are more individuals and groups involved, particularly from a public-sector perspective – but without the structures in place to support this. Bek fears that new investment might end up being spent on complex stakeholder management rather than on schemes and initiatives that will deliver benefits to local communities.

Will politics get in the way?

The implication of the white paper is that Homes England is going to become increasingly interventionist, as it determines which places get investment for housing and regeneration. The deadline of 2030 is likely to mean that it will be the towns, cities and regions with the resources to organise themselves quickly that Homes England selects. This doesn’t address the issue of capacity building in those areas that need it most. And how much will politics – the Conservative Party’s desire to hold onto the red wall, for example – determine where investment goes? 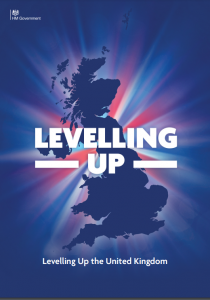 Members of the steering group also highlighted that it remains unclear how levelling up will work alongside the planning reforms. The Planning Bill is due to go before parliament this spring, having been delayed from last year. The Conservatives’ shock defeat in the Chesham and Amersham by-election in June 2021 has reportedly led to a shift in government policy towards planning.

As a result, the government has supposedly scrapped its plans for a zonal planning system that would classify land for either growth, renewal or protection. The focus is now on building more homes in the Midlands and the North than in the South East. But, as Tony pointed out, what works for rural parts of the South East (like Chesham and Amersham) doesn’t work for the capital. London needs more housing and can accommodate building at much greater densities.

What’s the role of transport?

Although transport is one of the white paper’s 12 missions, last year’s decision last year to scrap the eastern leg of HS2 from Birmingham to Leeds was met with criticism from leaders in the North East and Midlands, who argued that this undermined the commitment to levelling up. One member of the steering group suggested that a lack of clarity around the government’s transport policy will impact on how levelling up is delivered.

However, Tony suggested that the new ambition to improve local public transport connectivity within other towns and cities is a welcome shift in policy. This will help boost local economic growth across the country. However, this shouldn’t be at the expense of London’s transport system which is preparing for a managed decline scenario if the government doesn’t provide the emergency and long-term funding it needs.

And the fact that HS2 is opening up new parts of London, such as Old Oak Common in West London, to the North is an opportunity to foster more joint initiatives with those regions, to share and build on the prosperity that the high-speed line will bring.

What’s next for London?

Coming in at over 300 pages, the sheer length of the white paper means that many of us are still getting to grips with the details. There will no doubt be much more analysis of what levelling up means for London over the coming months. Many questions remain, particularly about how it will be funded and how success will be measured. But, as our Building Recovery programme has shown, now is the time for London to define what levelling up means for the capital and how the built environment sector is going to help deliver it.

If you have a new initiative or idea for a Spotlight, please get in touch with Sophie Nellis.